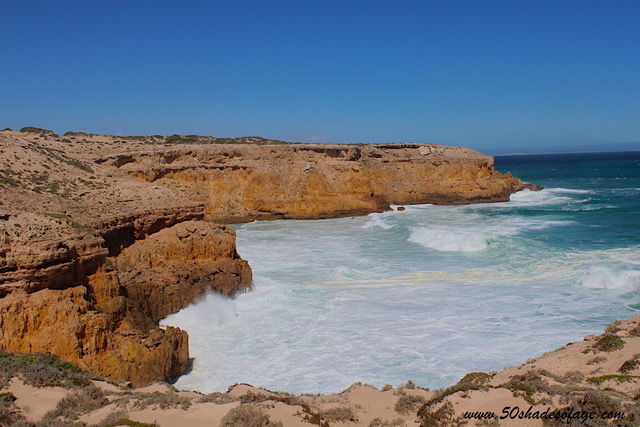 Contributed by Kathy Marris of 50 Shades of Age

During our two week sojourn around the cape it unleashed some of the most striking jagged coastlines and wilderness that I have ever seen. Words cannot describe the abundance of natural wonders and the untamed and unspoilt coastlines that there are to explore.

Commencing at Whyalla at the top of the Eastern Eyre Peninsula on the protected waters of the Spencer Gulf, you travel south on the Lincoln Highway where you will discover the small coastal communities including Cowell, Arno Bay, Tumby Bay, to the city of Port Lincoln. Port Lincoln is well known for having a vast variety of seafood from the beautiful pristine waters surrounding Eyre Peninsula’s east coast.

In complete contrast, the West Coast with rugged cliffs that tower over the pounding Southern Ocean, secluded white sandy beaches and ocean caves, is as unique and as untamed as the Wild West. There are cliff top drives with views that will take your breath away and calm watered bays of picturesque little coastal towns where you can sit back and relax and maybe dangle a line.

Must see places on the West Coast include, Coffin Bay, Sheringa, Elliston, Venus Bay and Streaky Bay. If you have time take a drive inland to the magnificent Gawler Ranges.

The total distance from Whyalla to Ceduna, hugging the coastline of the Eyre Peninsula is 675 kms. 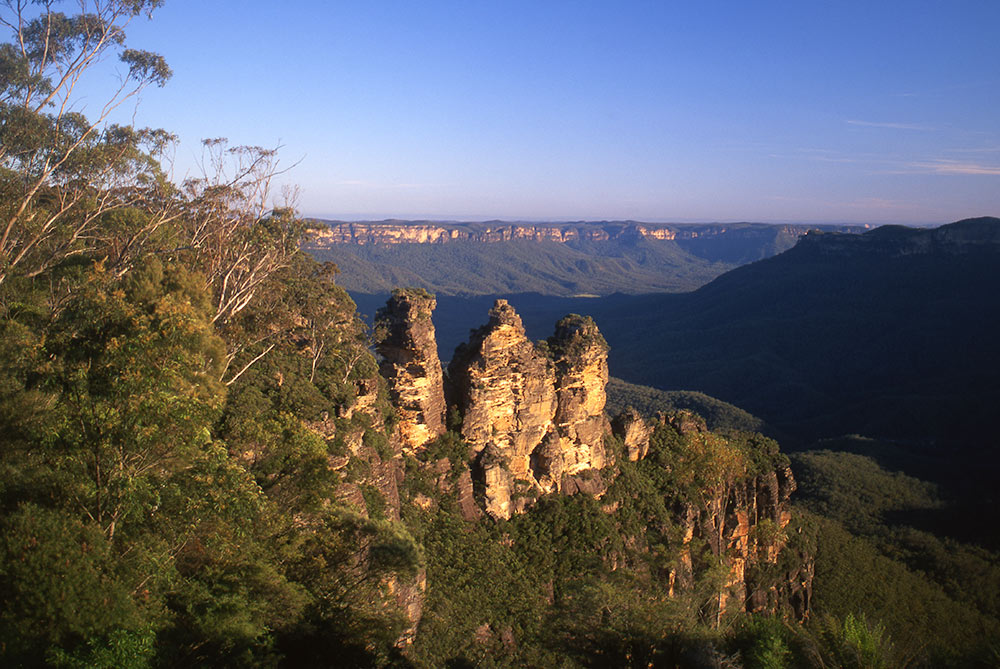 Contributed by David Angel from Travel with Little One

The Greater Blue Mountains is one of Australia’s great road trips, even if it’s one relatively few visitors do in full.

It’s actually a network of roads and diversions, with a rough figure-eight-shaped main route that runs for over 1,000 km in total.

The Blue Mountains are a series of sandstone plateaus and deep forested valleys less than two hours (around 100 km) from the centre of Sydney, and they are one of the most popular destinations within easy reach of the city, with some of the most amazing scenery in Australia.

Katoomba is the obvious place to stop by for a day or so, with some of the best walks and views in the region, including the famous Three Sisters rock formation. Blackheath, 15 km north along the drive, also has plenty of great hikes.

The Greater Blue Mountains Drive goes way beyond this, however.  The mountains are part of the Great Dividing Range, which runs parallel to the whole east coast of Australia, and the drive also includes neighbouring ranges.

It runs north, doing a circuit of the vast wilderness of the Wollemi National Park, as far as Muswellbrook in the Upper Hunter Valley, before heading south again.

The southern section is just as spectacular, skirting the largely unexplored Kanangra-Boyd National Park and the gorgeous Southern Highlands before returning to the Blue Mountains themselves. 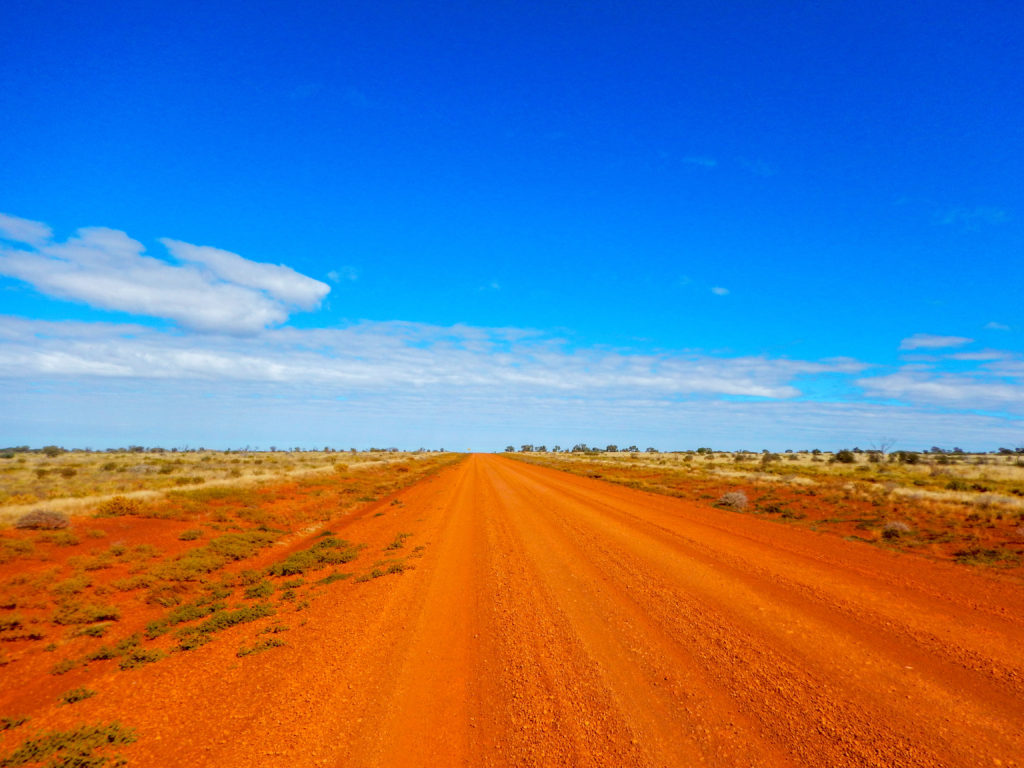 Contributed by Todd and Chantelle Powell of Over Yonda Adventures

Almost cutting Australia in half lengthways is a ribbon of rough, red dirt called the Great Central Road. It stretches from the breathtaking monolith of Uluru across 1100 kilometers of stunning Australian outback, through friendly and culturally rich remote aboriginal communities, finishing in the gold laden grounds of Laverton, Western Australia. Encounters in the small communities will give you personal insight into the ways of the desert and connect you with incredible people. Free camps abound along the road, tucked into small oasis’ of gumtrees and dry river beds. At night the sky comes to life as a billion stars twinkle above you, so clear and seemingly close enough to pluck from the very heavens with your hands.  A four day roadtrip down this lonely road will connect you with the very essence of Australia, putting into perspective the size and distance of this ancient and wondrous sunburnt land. 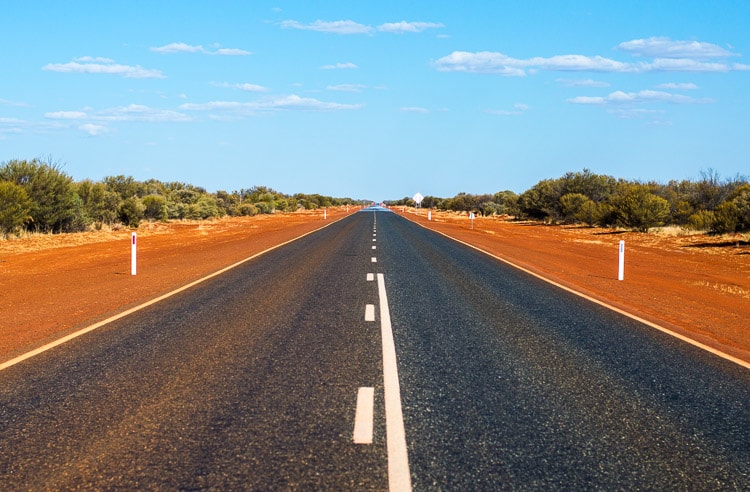 For anyone travelling through Australia, you must include a road trip through the Australian outback – particularly through the red centre.

This is such a great experience for families, to travel hundreds of kilometers’ without passing a single other car, sometimes down dirt roads.  Not to mention the iconic Australian sights such as Uluru, Kings Canyon, towns like Alice Springs, Katherine and Darwin and the fantastic landscapes of national parks such as Litchfield and Kakadu.

You will also have a great opportunity to learn about Australia history including Aboriginal culture and how locals live in the harsh environment of the Australian outback. 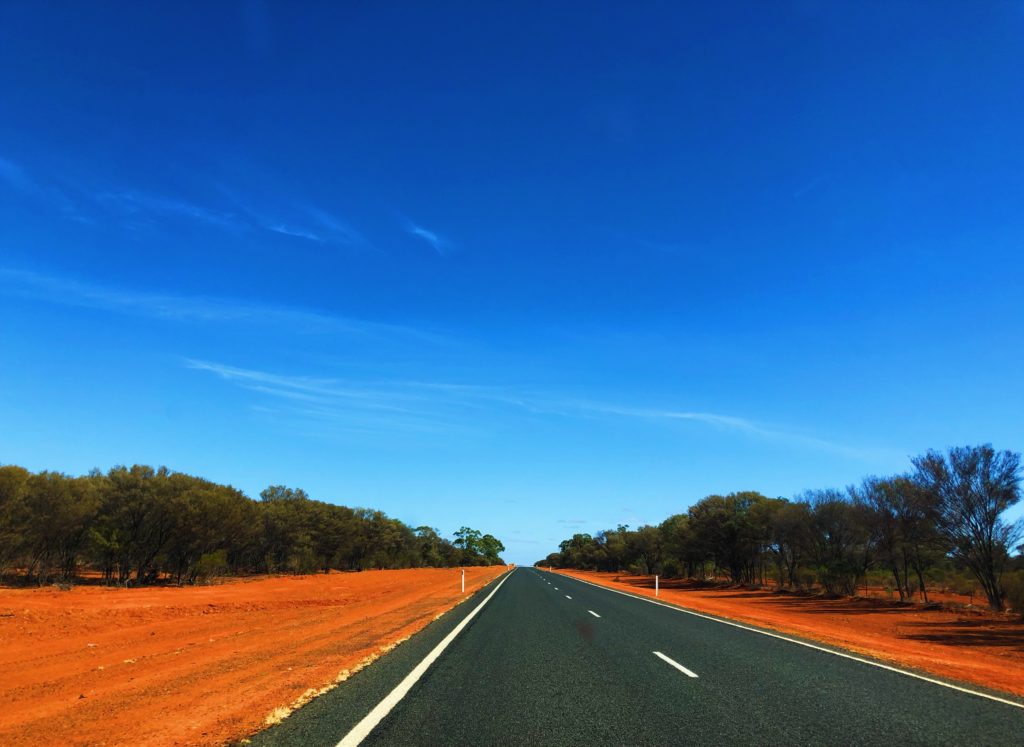 Broken Hill, NSW is Australia’s most accessible Outback city with sealed roads taking you all the way there from Adelaide, Sydney and Melbourne. The trip from Sydney to Broken Hill is a spectacular road trip, with the landscape transforming from the coastal dunes and cliffs, through the Blue Mountains and its incredible forests,to the plains and then to the deep red dirt of the Outback.

Scattered along the way from Sydney to Broken Hill are some incredible Australian townships. The first days drive will take you across the Blue Mountains. Watch out for the Lolly Bug on your left as you head down the mountain into Little Harley. It’s a great morning tea spot for a drink and a sugar hit. At Lithgow head towards Bathurst where you can take a drive around the famous Mount Panorama race track, home of V8 Supercar racing before heading to Wentworth (if you have time, explore the caves!), through Dubbo for a petrol stop and then onward to Nyngan which a great spot to stay for your first night. Nyngan is home to the “Big Bogan”, one of Australia’s “Big Things” which is a great photo opportunity. Sydney to Nyngan is around 550 km via this route, taking almost 7 hours.

Your second day of driving will take you through Cobar, a mining town which is worth exploring. Head to the open cut mine for an incredible look at how mining shapes the landscape. As you leave Cobar, you may like to add the Mount Grenfell Historic Site to your drive. It is a detour but will open your eyes to Australian Aboriginal rock paintings. From here you can head straight to Broken Hill which you should reach before night fall, or take an extra night and head to White Cliffs where you can spend the night underground and then spend some of the next day opal fossicking. It is quite a unique experience. Nyngan to Broken Hill is around 590 km and just over 6 hours drive (not including detours noted above).

The trip to Broken Hill from Sydney needs at least two days to do it safely, although three days (two nights) will give you the flexibility to explore many of the sites and attractions along the way. From Nyngan onwards you will start to see wildlife along the sides of the road including emus, wallabies and kangaroos, although feral goats are the most numerous. For this reason, we highly recommend you only drive during the daylight hours.

Broken Hill itself is an amazing town to visit. You can explore amazing national parks, mines, art galleries and much more. 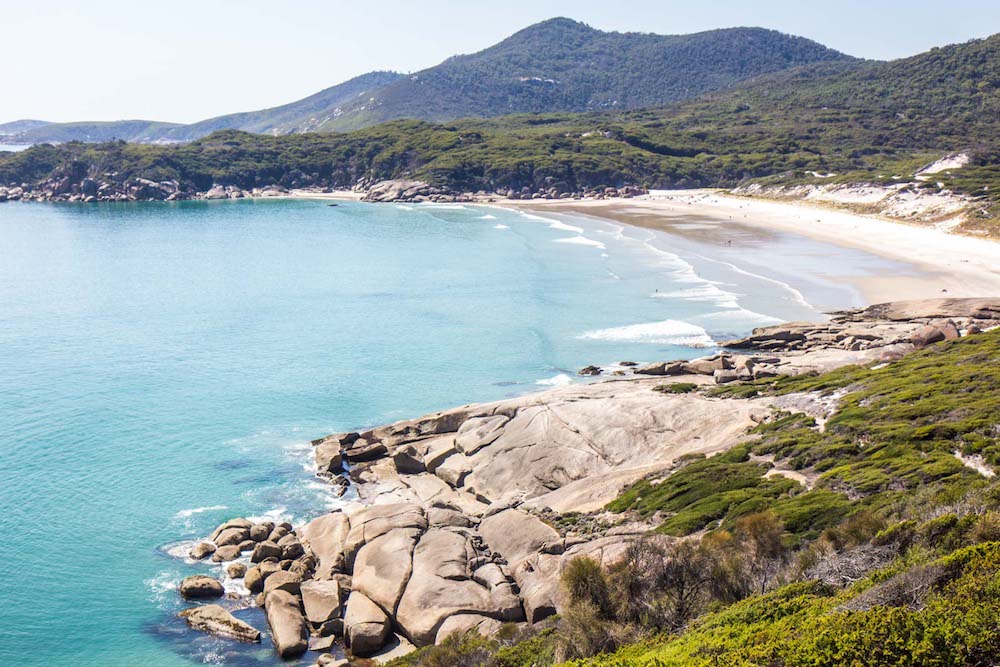 To drive between Melbourne and Sydney, you can take an inland route or a coastal route. I would recommend going along the coast because you’ll get an incredible diversity of culture and nature.

If you take your time, you can spend the night at beautiful wilderness spots like Wilsons Promontory and Croajingalong National Park. You can see colonial history at Walhalla and relax at beachside towns like Narooma. And, if you’re inclined, you can even do a slight detour and a spend a day in Canberra.

The average length of the drive is about 1400 kilometres and it will take about 18 hours to drive. I think the perfect length of time to do the trip is about 6 or 7 days, which means you do around 3 hours of driving each day and then can enjoy the area where you’re going to spend the night.

There is lots of accommodation along the way, so it’s easy enough to do the trip in a car and stay at hotels along the way. There are also lots of caravan parks, if you prefer to travel in a campervan. 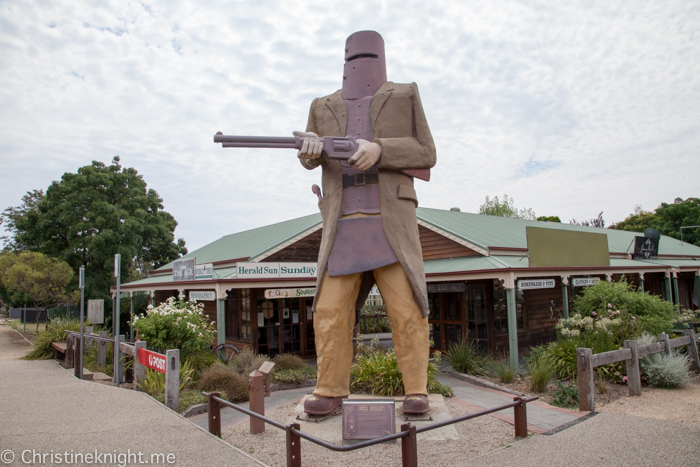 The Sydney to Melbourne inland drive via the Hume Highway is 877.6km and takes approximately 8-9 hours to complete if driven non-stop. We prefer to break the journey into two or three nights, but there is so much to see that I would recommend allocating even more time if it’s available. Highlights include the historic Dog on the Tuckerbox at Gundegai, the Big Merino at Goulburn, the submarine at Holbrook, beautiful Albury on the NSW / Victorian border and Glenrowan, where the famous Kelly Gang made their final stand. If you have time, we recommend driving via Canberra and spending an extra few days there. 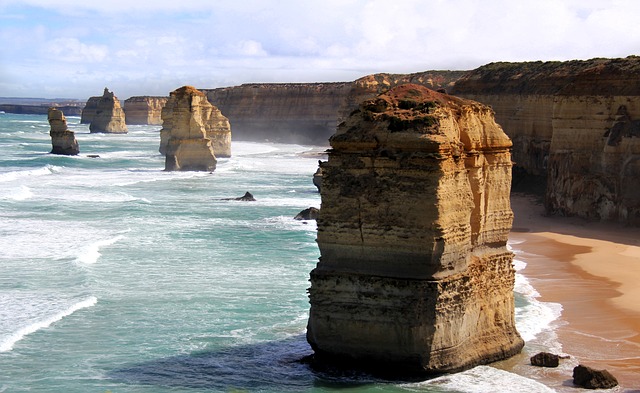 Contributed by Tom from The Travelling Tom

Driving from Adelaide to Melbourne is one of the most interesting road trips you can do in Australia. It’s an extension of the popular Great Ocean Road and includes a lot of great places to visit.

At 727.3km (451.9 miles), it’s one of the shorter road trips you can do in Australia. Depending on the route you take, it should take 5 days to complete. This depends whether you take the inland or the coastal route. The inland route will take you to the Grampians National Park, which is worth visiting if you like stunning scenery.

However, if you want to get there quicker, stick to the coastal route. There are plenty of places to stop at along the way, such as Apollo Bay, Cape Otway and Torquay, where you can check out Bell’s Beach, which is famous for its surf.

For a short trip, there are a lot of places to see. It’s one road trip you can’t miss out on while you’re in Australia!

Hopefully, this post has inspired you to go on an Australian road trip.  And to make sure you pack everything you need before you hit the road, check out my road trip packing list.

Have you road tripped in Australia? What do you think are the best Australia road trips?