Lao New Year, known as Boun Pi Mai locally, is one of the many festivals and public holidays celebrated throughout the year in the landlocked Southeast Asian nation. It is celebrated by Laotians all over the world.

That said, Boun Pi Mai is easily one of the biggest national celebrations held in Laos and is a cultural experience you won’t want to miss on a visit. To help you plan the perfect trip during this amazing festivity, this article looks at everything you’ll need to know before jumping into a celebration of Lao New Year yourself.

When is Lao New Year?

Boun Pi Mai falls in mid-April and takes place over 3-4 days (sometimes unofficially, it lasts over a week in some locations). It marks the beginning of a new solar year, as the sun enters Aries and comes close to the Vernal Equinox.

The exact dates Lao New Year occurs on can vary from year-to-year. However, it always falls on 3 days between April 13th and 18th.

The dates that Boun Pi Mai takes place on are heavily based on the ancient Hindu calendar, although today in Laos it is very much a Buddist festival. As a result, Lao New Year coincides with other national and cultural new year celebrations that take place in India, Myanmar, Nepal, Thailand, Sri Lanka, Cambodia, and Bangladesh.

What Does Lao New Year Symbolize?

Aside from marking the transition from the old year to the new, Lao New Year has a rich historical tradition. It is inspired by rituals held by both the ancient Khmer and Mon Burmese civilizations and has its roots in Hinduism.

The celebration follows a legend of a mythical king called Thao Kabinlaphrom, who was beheaded after losing a bet. It is believed that if his severed head had touched the ground then the world would have been destroyed.

To prevent this, his seven daughters brought the head to Mount Sumeru. Each of the seven would take their turn at looking after the head every Boun Pi Mai. This event is reenacted each year during the annual festivities.

Should I Visit Laos During Boun Pi Mai?

Seeing the traditional Boun Pi Mai celebrations with your own eyes is well worth the visit to Laos. It offers a glimpse into Laotian national culture and is a colorful and fun festival to experience in person.

However, there are of course a few things to remember when visiting during this major celebration.

First of all, if you’re traveling around the country be prepared to deal with a high volume of travelers on intercity buses and transportation. Lao New Year is an important time of the year for Laotian families and many people nationwide return to their hometowns to visit their relatives during the festival.

Always be mindful of your surroundings and your valuables, as you would during any major celebration whilst traveling abroad. Laos is usually a very safe country and crime against tourists is rare. Nevertheless, the streets can be very busy, and opportunistic theft and pickpocketing do happen on occasions.

Also, make sure to pack something waterproof for valuables like mobile phones or hotel room keys. Water fights between locals are very common and tourists are often caught in the “crossfire”, or drawn into the fun entirely.

How Do People in Laos Celebrate the New Year?

Boun Pi Mai is as much a celebration of nature as it is the start of a new year in the Laotian calendar. Natural elements and life play an important role during the festival.

Some of the most important symbolic items to play a part in Lao New Year include:

The celebration marks three significant days that deal with the transition from the old year to the new. Each of these days has its own symbolism and customs.

Day One of Boun Pi Mai: A Day of Cleansing

The first day marks the final day of the year. It is a time of symbolic cleansing in preparation for the coming year. Buddist statues are washed, and water fights happen to clean away any bad things from the previous year.

Day two of Boun Pi Mai represents a day between years or a “day of no days”. It is normally a day of spiritual practice, where people visit monasteries and hear sermons by monks.

However, it is also a highly active day and boasts many of the most important celebrations. People build sand stupas (round tower-like mounds) to protect against evil spirits. These vary from simple cones of sand to elaborate recreations of the ornate monastery stupas.

In addition to this, parades take place in major cities all over the country and many beauty pageants are also held. It is easily the most hectic day of the festival.

Day Three of Boun Pi Mai: A Day of Spirits

This marks the first day of the new year. It often starts with processions of monks and tak bat (providing alms of food or money). 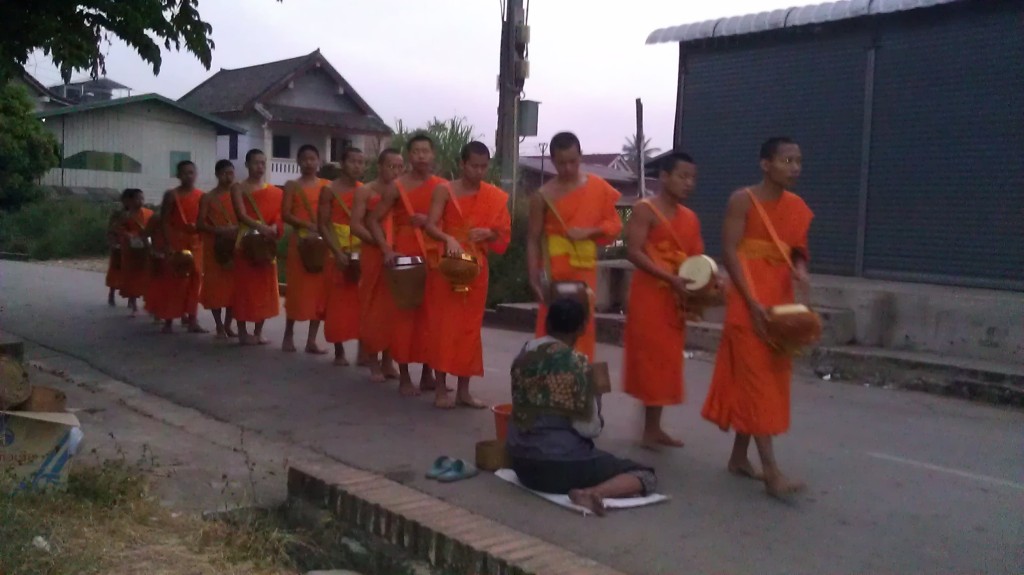 Kwans, a Laotian term for spirits within living entities, play a big part in the day’s festivities. One of the most important features is the performing of Baci (or blessing) ceremonies, where people try to prevent their kwan from escaping their bodies at the start of the year.

On this day locals will often tie a white thread on their wrist that prevents the kwan from escaping by symbolically tethering it to the person’s body. The day ends with beautiful candle-lit processions and the chanting of monks.

What Food Do People Eat on Lao New Year?

Like many special celebrations around the world, a lot of food is eaten on Boun Pi Mai. There isn’t one special specific dish which is eaten to symbolically mark the special events, however, common food you’ll probably encounter include the following:

Where are the Best Places to Visit During Laos New Year?

The best places to be in Laos during Boun Pi Mai are the big cities like Luang Prabang and Vientiane, although you’ll find celebrations happening everywhere in the country during the key April dates.

However, the big cities where the most elaborate monasteries and pagodas can be found, which offer a truly unique view of Boun Pi Mai. The biggest and most spectacular celebrations take place around these sites and these are the festivities you won’t want to miss out on.

There’s a lot to see when visiting Laos during the annual new year festivities in April. Experiencing Boun Pi Mai in the country is an experience unlike any other you will find in Laos and is well worth taking the time to plan a visit during this time.

Susan Noel is an experienced content writer. She is associated with many renowned travel blogs as a guest author where she shares her valuable travel tips with the audience.