When visiting Turkey, people often visit Cappadocia for the fairy chimneys and hot air balloons or Ephesus for its history and ancient ruins. However, you really cannot leave Turkey without visiting Istanbul. Istanbul is a global city that spans both continents of Europe and Asia. It has survived the Roman and Ottoman empires, and is now the hub of culture, commerce and society in the Republic of Turkey. This 3-day itinerary to Istanbul is jam-packed with some of the best activities, restaurants and advice for exploring the city written by an American expat who has lived in Turkey for five years.

An important note about this itinerary is that it should be done during the week, not over the weekend. Istanbul has a population of about 14 million people and has thousands of tourists at any given time. You will enjoy this itinerary more during the weekdays when most people are working and there are less tourists. Be ready to start early in the day as this is not a slow-travel itinerary! 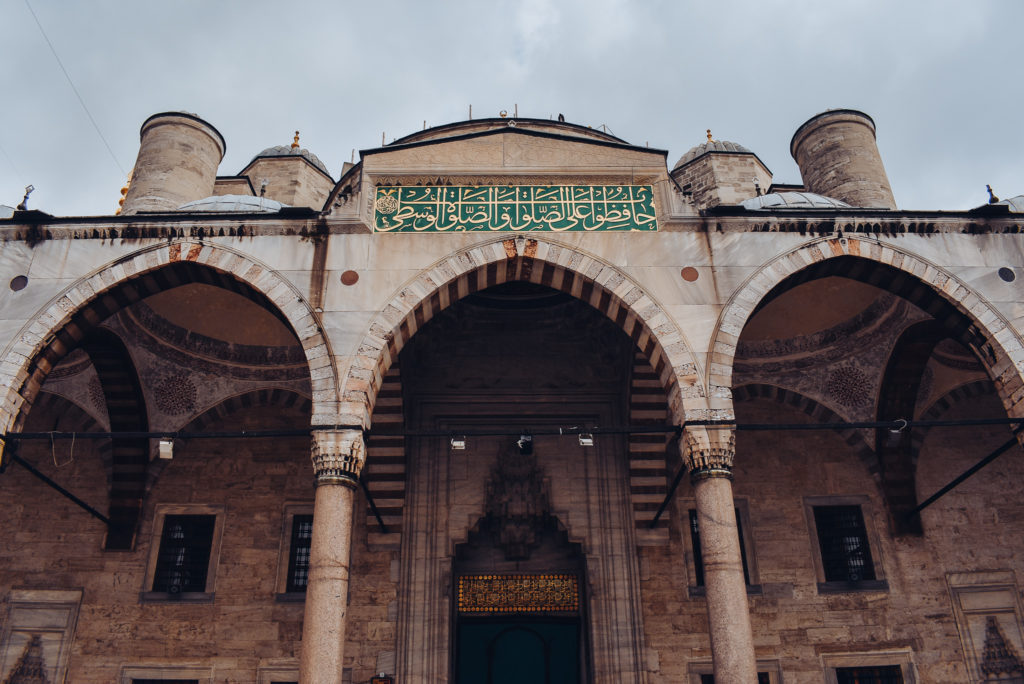 The Blue Mosque, also known as the Sultanahmet Mosque, is one of the most iconic structures of Istanbul found in the Fatih district. It is open daily but closes to visitors on Friday afternoons for a few hours during the Muslim worship service and prayer. 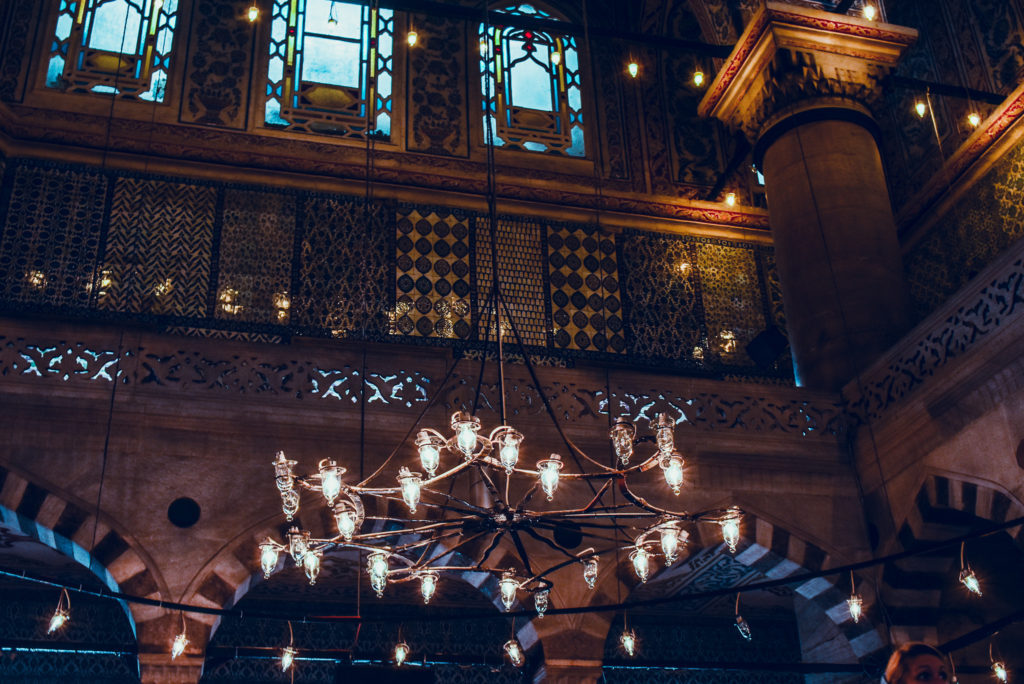 It is not a museum, it is a functioning mosque, so women must cover their head when they enter. There are complementary scarves provided before entering. The interior of the Blue Mosque has beautiful, ornate designs that are reminiscent of Ottoman style and design. 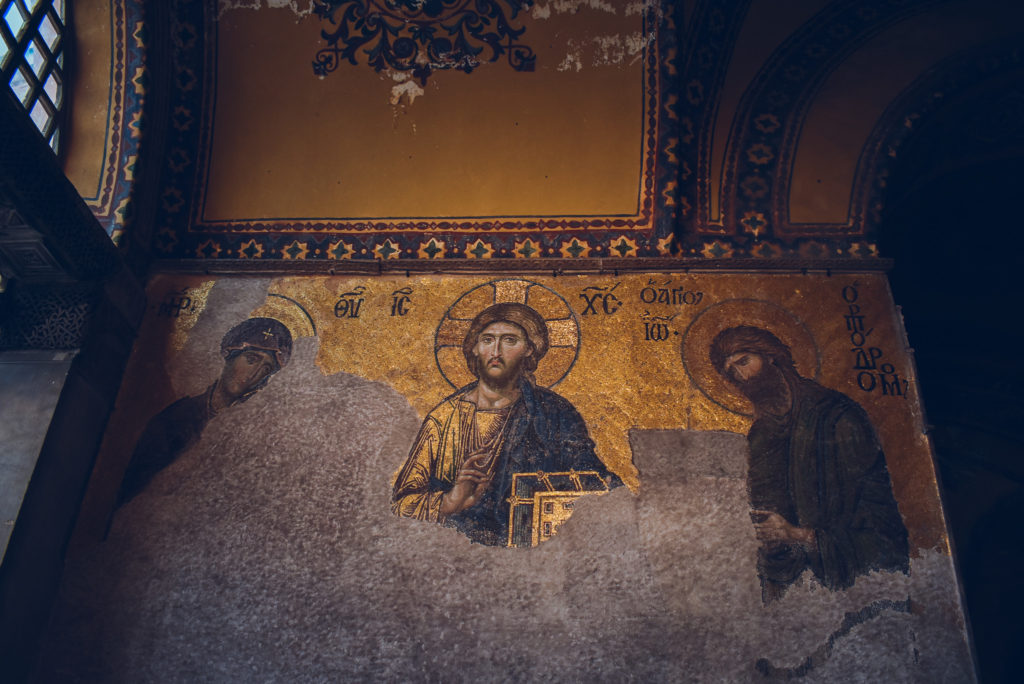 The Hagia Sophia was built during the Byzantine Empire and was originally a basilica. It was later converted into a mosque during the Ottoman Empire but is open today as a museum. This is my favorite structure in Istanbul, for its architecture, colors and interior mosaics. Since it is a museum, there is an entrance fee of 60 TL (roughly 11 USD).

The Topkapı Palace was home to the sultans and their concubines during the Ottoman empire, until 1850 when they moved to Dolmabahçe Palace. The architecture and design of the palace is distinct from other structures nearby, and the entire facility feels charming and serene. After the fall of the Ottoman empire, Mustafa Kemal Ataturk, the founder of the Turkish Republic, converted the palace into a museum in 1923 and it is still open to visitors today. 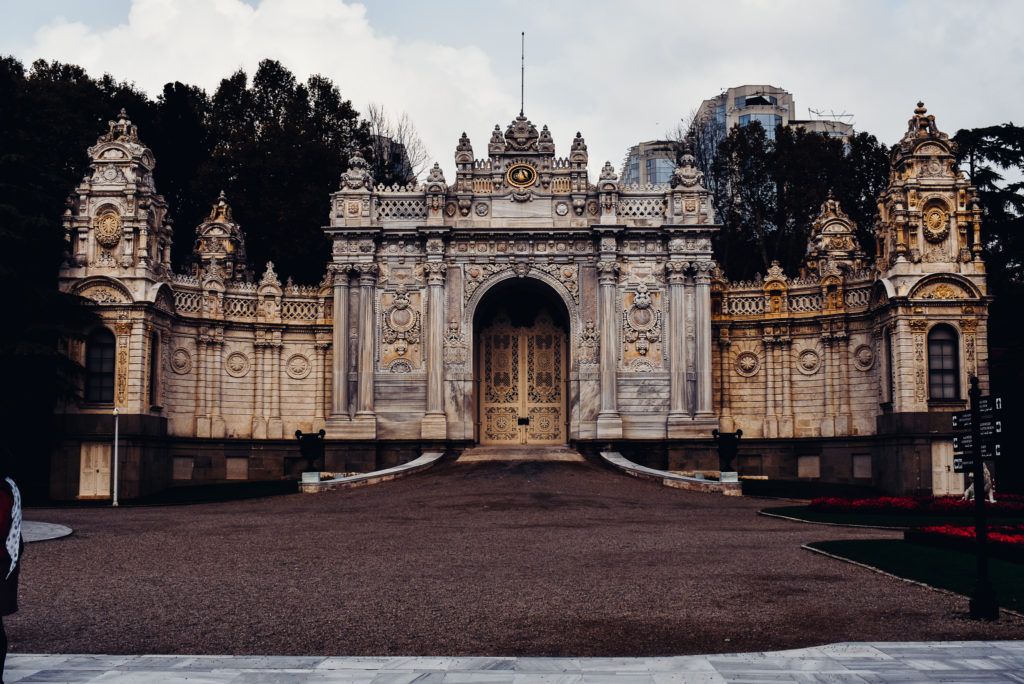 This modern European-style palace was built in 1850 near the end of the Ottoman Empire. The sultan Abdülmecid commissioned the palace because he felt that the Ottoman sultans needed a more European style residence. They certainly accomplished their goal, as the Dolmabahçe Palace and its facility is one of the most luxurious, architecturally interesting and expansive sites in the city. You cannot leave Istanbul without visiting Dolmabahçe Palace.

The entrance fee to both the palace and the harem are a bit pricier at 90 TL (17 USD), but is certainly worth the splurge. 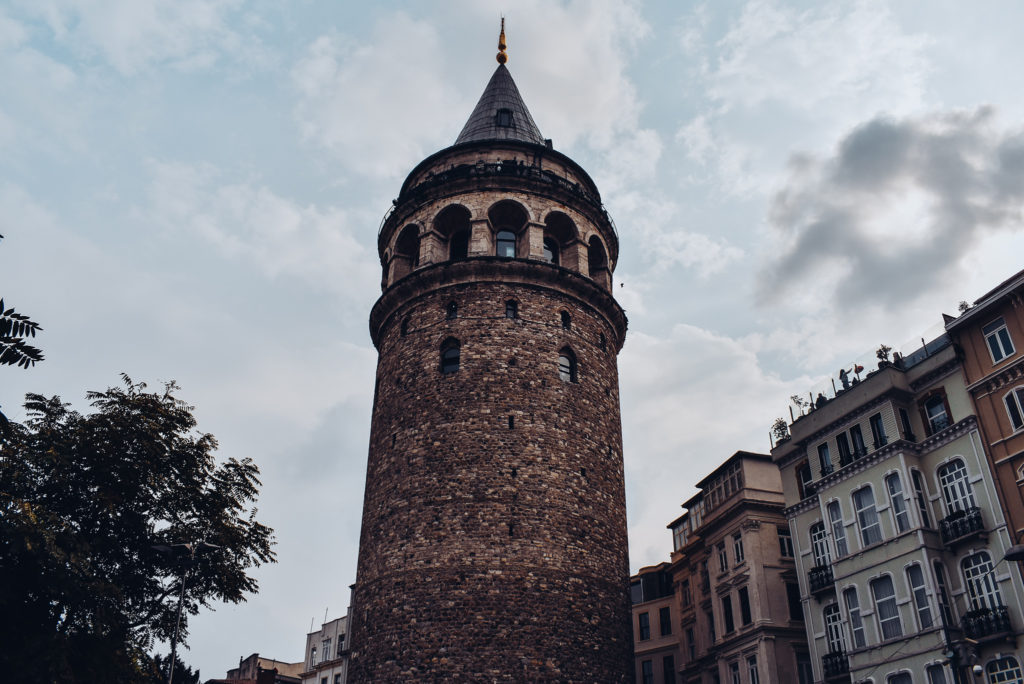 The Galata Tower is a beautiful old tower that was originally built as part of a wall of defense in the 14th century. Now it is surrounded by apartments, shops and cafes but if you are willing to trek up the many flights of stairs, you will see one of the most beautiful views of Istanbul. It costs about 25 TL to enter. 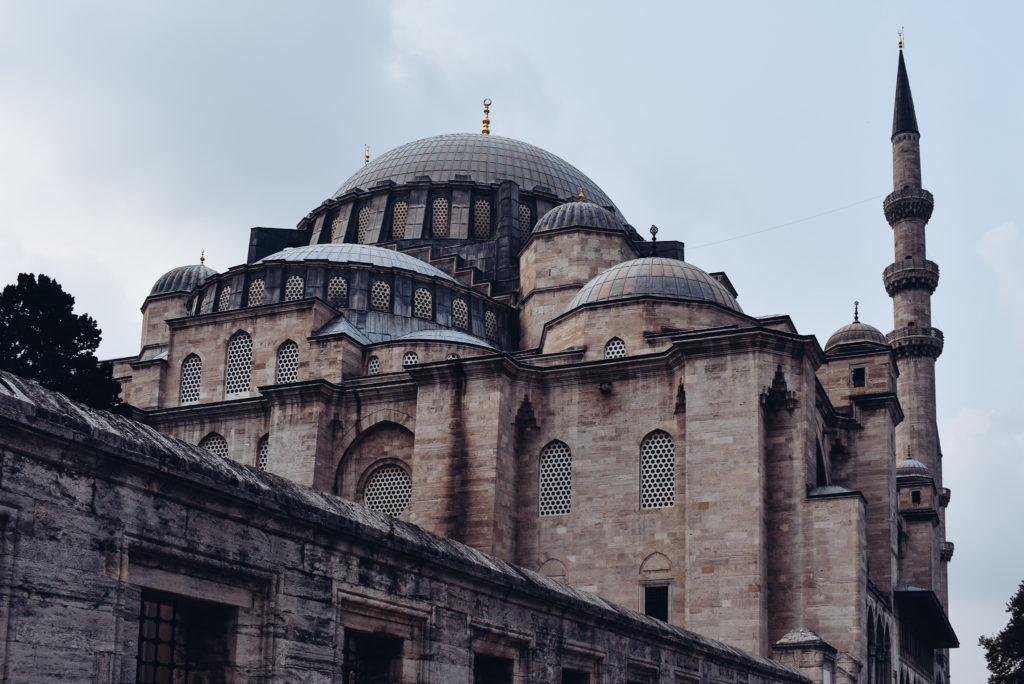 The Süleymaniye Mosque is an equally beautiful, but less popular version of the Blue Mosque. This was commissioned by the Sultan Süleyman (hence the name) and completed in 1557. It is located on the Third Hill in Istanbul right across the bay from Galata Tower.

The basilica cisterns (in Turkish Yerebatan Sarnıçlar) are located near the Blue Mosque and Hagia Sophia. These underground cisterns are remnants of the Roman Empire. It is one of the most unique things to see in the city. There is a pretty cool Medusa head underneath one of the pillars that is worth seeing. Entering the cisterns will kind of feel like entering another world and era.

The Grand Bazaar, in Turkish Kapalı Çarşı, is one of the largest markets in the world with around 4,000 shops. There are many entrances and a wide variety of items for sale. You can expect to get lost but embrace this as part of the fun.

Bartering is pretty common in Turkey, so this Is a great opportunity to practice your haggling skills. Don’t feel bad, they are not expecting you to accept their first price. Some notable items to look at would be jewelry, carpets, textiles, and spices. The Grand Bazaar is also a great place to sit for some Turkish tea! 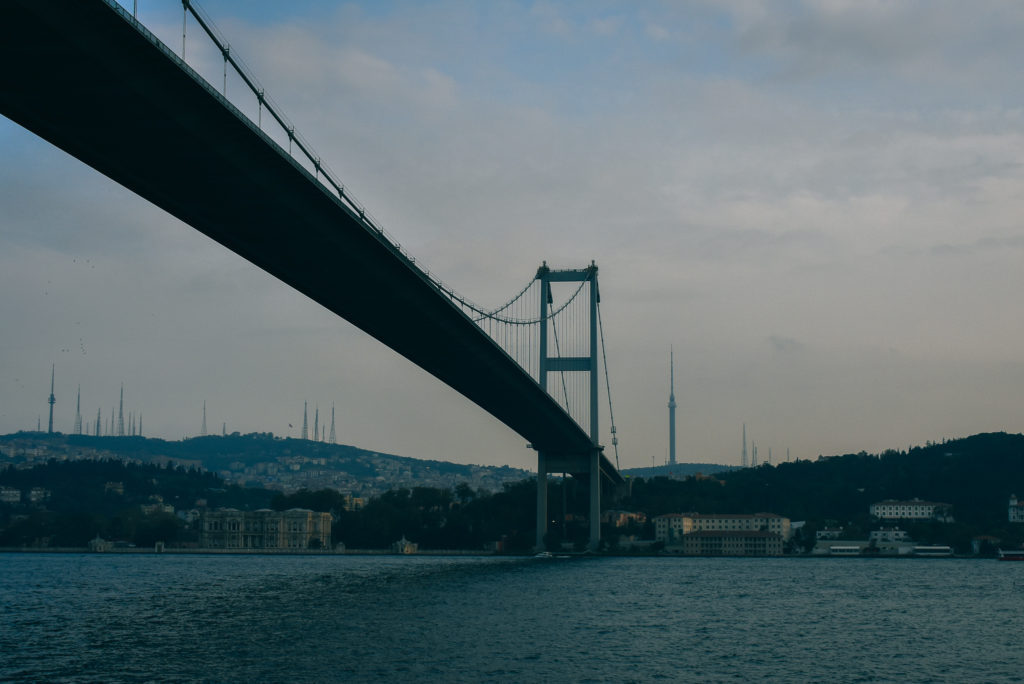 Phew! Are you still alive? How are your feet? I think finishing this tour off with a nice, restful boat tour of the Bosphorus is a great way to complete your time in Istanbul. The tour will pass some of the most iconic places in Istanbul that you didn’t have a chance to get to (because honestly, three days is not enough to explore all this city has to offer), like Rumeli Castle, Ortaköy Mosque, The July 15 Martyrs bridge, and many other beautiful structures. 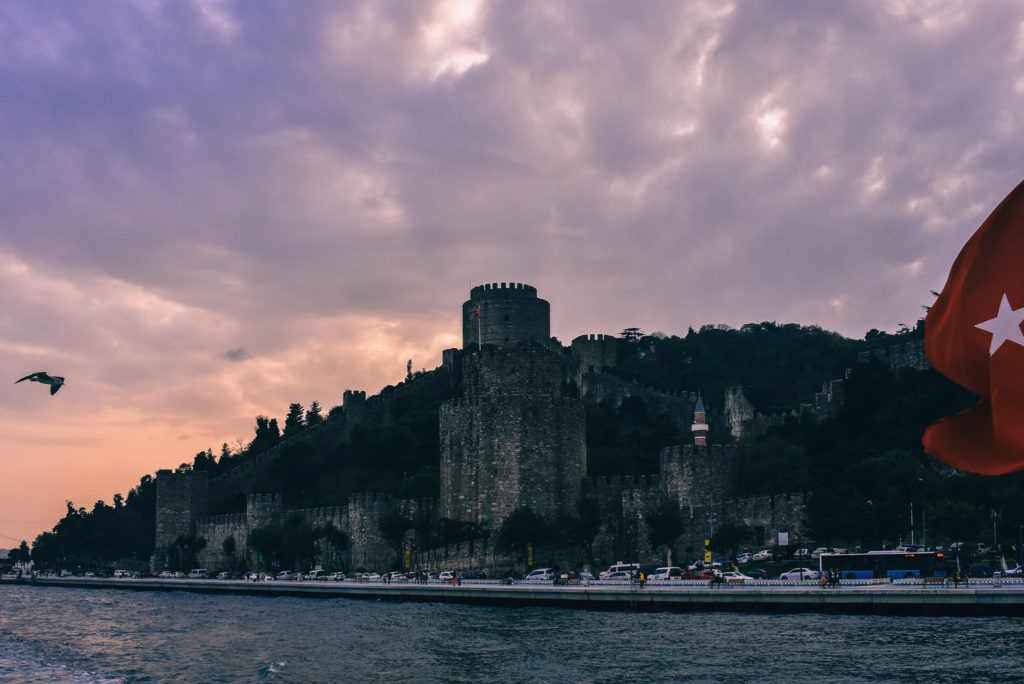 Also, who doesn’t love a nice boat ride on the water? The boat tour lasts for about 2 hours and is very affordable (20 TL per person). You can purchase tea or snacks on the boat if you get hungry, or you can bring your own.

What and Where to Eat in Istanbul

Limos Café for breakfast in Beşiktaş 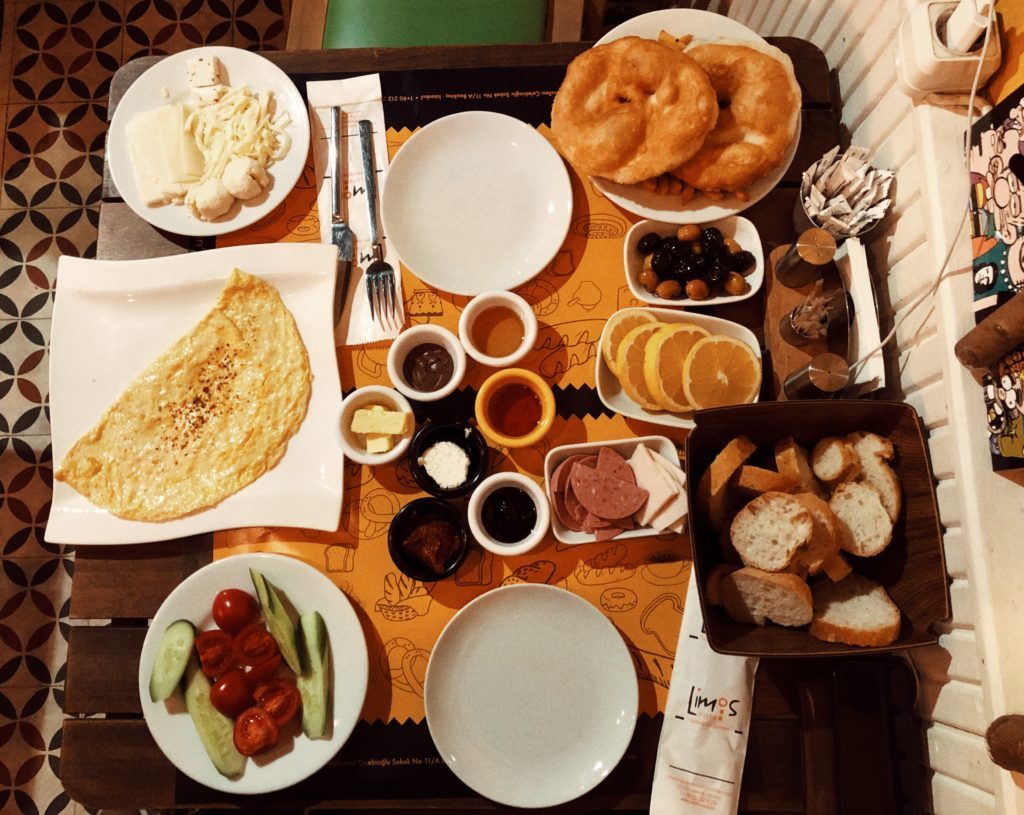 Limos Café is located in the neighborhood Beşiktaş, a young neighborhood full of cafes, shops and places to eat. This was a great Turkish breakfast and we were pleased with the price (around $12 USD for me and my husband together). This breakfast had all of the classics and more: cheeses, cucumbers, tomatoes, olives, boiled eggs, breads, jams, etc. with unlimited tea. Have you caught on to the theme of tea yet? I highly recommend Limos.

Shang Palace in Beşiktaş for some fine-dining Chinese food

So, this place was certainly a splurge and we went because it is really hard to find good Asian food in Turkey. This Chinese restaurant had the best Chinese food that I have ever had. It is located in the Shangri-La Hotel very close to the ferries in Beşiktaş. If you eat here, you can expect to spend about $50-100 USD (if you go all out). This is located not too far from Dolmabahçe Palace. 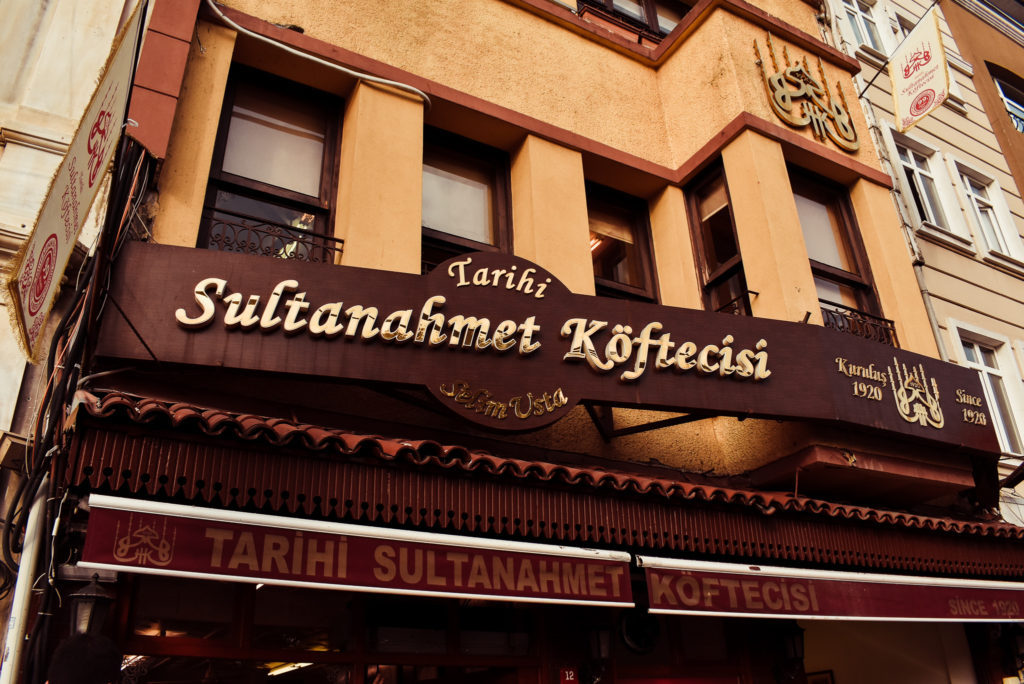 This restaurant serves traditional Turkish köfte, which are Turkish meatballs. It is located right across the street from the Blue Mosque, so it is a great choice for Day 1 of the itinerary. I recommend drinking some ayran, which is a salty yogurt drink, alongside your köfte. It is a classic Turkish beverage and goes well with the meatballs. I think it relaxes your stomach since the yogurt serves as a base to offset some of the heavy oil of the meatballs.

Another great way to try local food is to sign up for a food tour. Here is a review of a vegetarian Istanbul food tour.

During our entire trip we used the T1 Kabataş-Bağcılar Tramway. It gets you up and down the European side to most of these locations. You will need an Istanbulkart to use the tram, which you can buy at any tramway or metro station. You can walk or take a taxi when you feel the need to outside of using the tram. You can expect to walk a lot in the city.

Where to Stay in Istanbul

I hope you enjoyed this 3 day itinerary to Istanbul and are inspired to visit more of the beautiful country of Turkey!

Author Bio:  Kelsey is an American travel blogger who lived in Turkey as an expat for 5 years. She loves traveling, going on adventures to new places, cooking and drinking coffee with friends. She is the author of On Her Journey and hopes to inspire others to travel the world in search of new adventures. You can connect with Kelsey on Facebook, Twitter or Pinterest.