Both are challenging, spectacular, and demand high altitude walks above 5,000 meters. Both these treks take you to the lap of the Himalayas full of diverse topography and culture.

So, which to choose? Everest Base Camp Trek or Annapurna Circuit Trek?

Starting and Ending Point of these Treks

The starting point of Everest Base Camp (EBC) trek is Lukla, Khumbu region of Nepal.

To reach this trailhead you can either take a direct flight (45 minutes) from Kathmandu or you can take a bus ride (7-8 hours) to Jiri and walk to Lukla from there. From Lukla, following the classic trail through Namche Bazaar, you’ll reach Everest Base Camp.

Along with the starting point, Lukla is also the ending point of the EBC trek.

Annapurna Circuit trek starts from Besisahar, in the Lamjung District of Gandaki zone. To reach this starting point you can either take an 8-hour drive or an easy flight to Pokhara and a 2-hour drive from there to Besisahar.

While the trek ends at Pokhara which is the starting point of the best shorts treks in Nepal like the Ghorepani Poon Hill trek and the Annapurna Base Camp Trek.

Best Time for These Treks 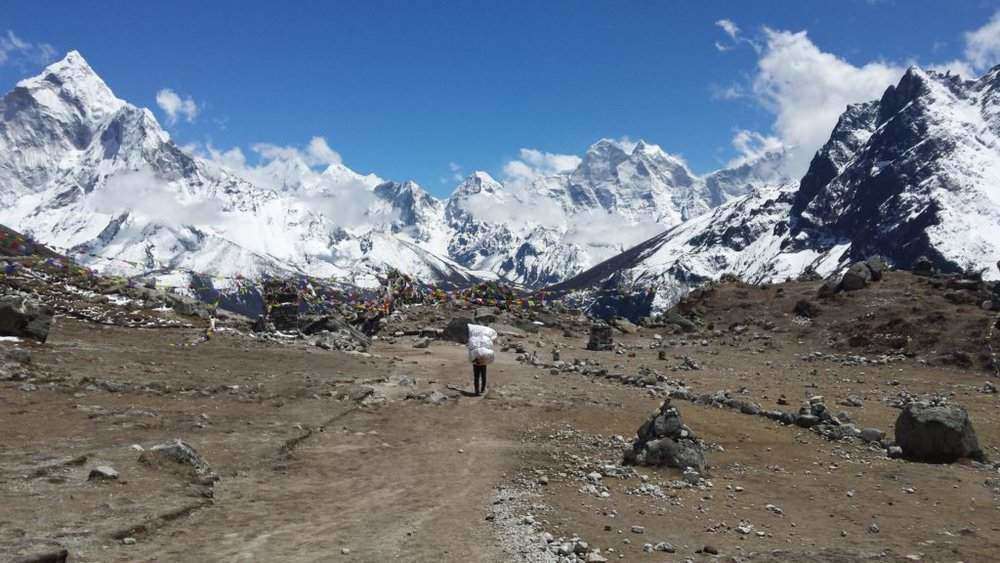 If you want to trek Everest Base Camp, then do it in October. It is because trekking in Nepal in October is considered as the most favorable time. Local months of autumn (September – November) and spring (March-May) are the best time to opt Everest Base Camp trek. This is because the weather is most pleasant, skies are clear, and the mountain views are best during these seasons. Plus, the rhododendron blossoms beautify the trekking trails at lower altitude during the spring months. 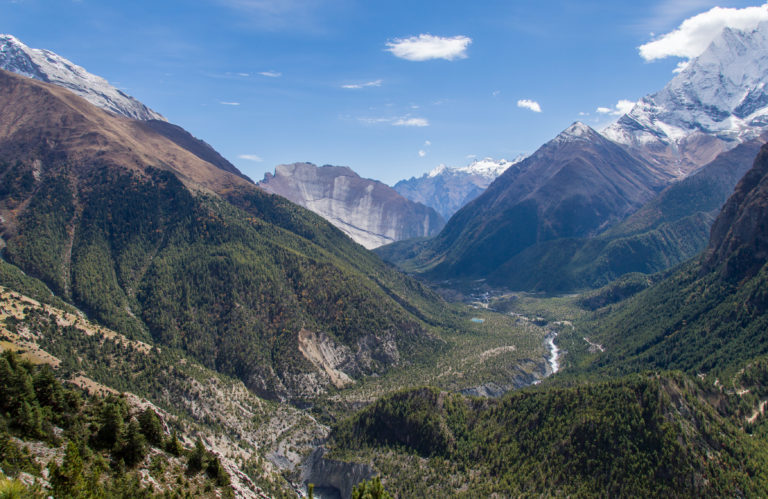 Like EBC trek, the best time to hike around Annapurna Circuit is during spring and autumn season. If you plan Annapurna Circuit trek in spring, the whole trail is beautifully decorated with colorful flowers. These seasons have bearable temperatures and stable weather favorable to most of the travelers.

Besides these seasons the time of monsoon is also the best time for this trek. Most of the region in the circuit lies in the rain shadow area. So, trekking in the monsoon in this region is doable and safe as well.

Acclimatization Days During These Treks

You will gain altitudes each day during the EBC trek. You will start from an altitude of 2,800 meters at Lukla to reach the final point at 5,555 meters, Kala Patthar. So, proper acclimatization during the trek is very important to help your body adjust to the increasing altitude.

During the 14-days trek to EBC, it is generally recommended to acclimatize at Namche Bazaar (4th day) and Dingboche (7th day) to escape altitude-related sickness.

You start Annapurna Circuit trek from 800 meters, Besisahar and ascend to 4,534 meters at Thorung Phedi. Starting from the low elevation you will need at least one acclimatization day during the Annapurna Circuit Trek.

Generally, during 16-19 days of Annapurna Circuit trek, the acclimatization day is on the seventh or eighth day in Manang at an elevation of 3,357 meters.

Accommodation and Food During These Treks

If you compare, accommodation facilities on EBC trek are little better than the accommodation on the Annapurna Circuit trek. Depending on your budget, you can find a number of options for accommodation. It ranges from basic tea houses to luxury hotels on the trekking trails.

During the trek, you will find a wide variety of food option ranging from local cuisine to western delicacies. But the cost of food in the Everest region is quite expensive than the Annapurna region because of the limited access to the place.

Along the Annapurna trail, you will find a number of classic Nepali tea houses where you can find a room for night stay. Unlike the EBC trek, you can find the option for homestay during Annapurna Circuit trek.

As compared to the EBC route, you can enjoy a variety of seasonal vegetables and meat on this trail. So, the cost of food and accommodation is quite reasonable on this trek.

Cultural Variation on These Treks

The Khumbu region is the home of Sherpa people. Along the EBC trekking trail, you’ll pass through several prayer stones with Buddhist scriptures, colorfully painted prayer wheels, and exquisite monasteries. These monuments reflect the Tibet-influenced Sherpa people of the region.

Annapurna region is culturally diverse than the Everest region. During Annapurna Circuit trek, you’ll encounter Gurung, Thakali, and Manangba people. Enroute you’ll find differences in their cultures and get a chance to discover a variety of local language, dress, and architectures.

Things to See During These Treks

EBC trek is a photographer’s paradise and there are several amazing highlights along the way. Phakding is a beautiful village with colorful prayer flags, prayer wheels, mani stones, and Chortens.

While Namche Bazaar is a popular and busy trading center. This is an awesome place to hang out after or before trek as this place is full of restaurants, pubs, and bakery-cafes.

You will also walk to the Tengboche Monastery which is the largest of Khumbu’s Buddhist Monastery. And, Kala Patthar is the best vantage points in the Everest region to get the best views of Mt. Everest.

Annapurna Circuit Trek offers an outstanding view of Mt. Dhaulagiri and Annapurna range. During this trek, you’ll cross one of the most dramatic Thorong La Pass.

All the way to Annapurna Circuit, there are several eye-catching sights. On the way to Pisang, you’ll pass through many apple farms. Another thing to see in this trek is the Gangapurna Lake and the glacier on the lap of Gangapurna Peak.

The next attraction during the trek is Muktinath Temple. It is one of the holiest places for both Buddhists and Hindus community.

Trek Difficulties on These Treks

Both Everest Base Camp and Annapurna Circuit Trek don’t require any mountaineering experience. Both treks fall on the moderate level of trekking.

However, in terms of altitude, Everest Base Camp trek is more challenging the Annapurna Circuit Trek. During the EBC trek, by the second day on the EBC trek, you are at 3,240 meters in Namche Bazaar.

So, these days, many people opt for Everest Base Camp on Helicopter to avoid the risk of altitude sickness.

Nepal is a backpacker’s paradise. Both Annapurna Circuit and Everest Base Camp treks are amazing and full of adventures. From the trekking trails to the cultural explorations along the trekking trail you will witness a number of variations on these treks. So, you can choose among these treks depending on what you wish to experience during the trek.