Delhi is India’s capital and it’s growing every day. Modern Delhi is made of 7 different cities developed between 2,500 BC to 1900 AD. It is a perfect amalgamation of old and new. There are beautiful monuments, gardens, and markets. I have spent half of my life in this city and I would recommend every traveler to explore some of the places to understand the city.

Best Things to Do in Delhi, India 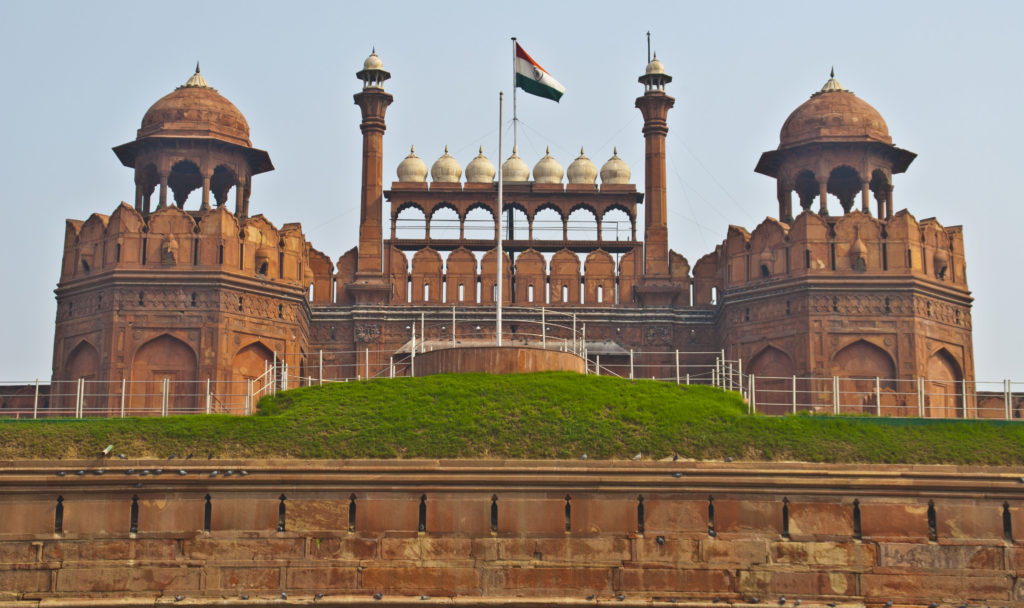 It is fort made of Red sandstone and most iconic structure of Delhi. It was commissioned by Mughal Emperor Shah Jahan in 1638 when he shifted his capital from Agra to Delhi. It remained residence of Mughal emperors for more than 200 years and now it a UNESCO’s world heritage site. The design of the fort is a perfect example of the intermingling of Mughal, European and Hindu architect. It is spread over of 254.67 acres and covered with high defensive walls. The inner parts of the fort were made of marble with floral decorations and double domes. 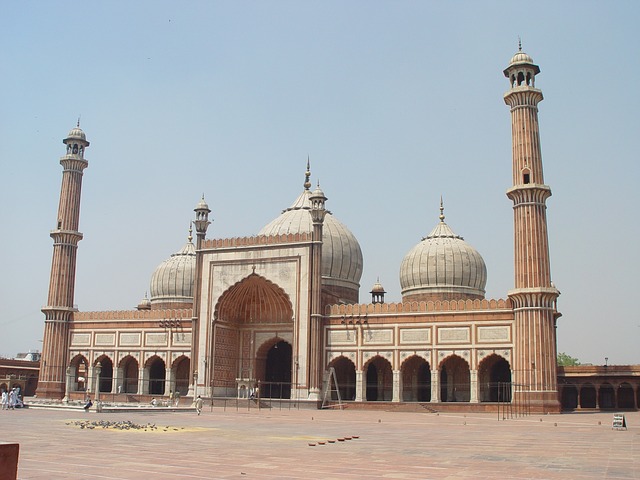 Jama Masjid is considered to be one of the biggest mosques in India. It was built by Mughal Emperor Shah Jahan after he shifted his capital to Delhi and was commissioned in 1656. This mosque was built on an elevated platform and can be accessed by climbing stairs. There are 3 entry points to the main compound and these are known as east, north and south gates. The 3 domes of the mosque are capped with white and black marble stripes, in contrast to the red minarets. The mosque faces west towards Macca. The Hauz (Shallow water tank) in the middle of the compound is used by people to wash hand and face before offering prayers. This courtyard of Jama Masjid can accommodate approx 25,000 K people. The outer and inner walls of it have ornamentations with floral motifs or calligraphic inscriptions. Three sides of the mosque are covered by open arched colonnades. Dress code is strict especially for women, better to wear long dress, skirt or trousers which should be till ankle and tops should cover at least half arm else they will not allow you entry or ask you to rent a long tunic (Which is worn by others). 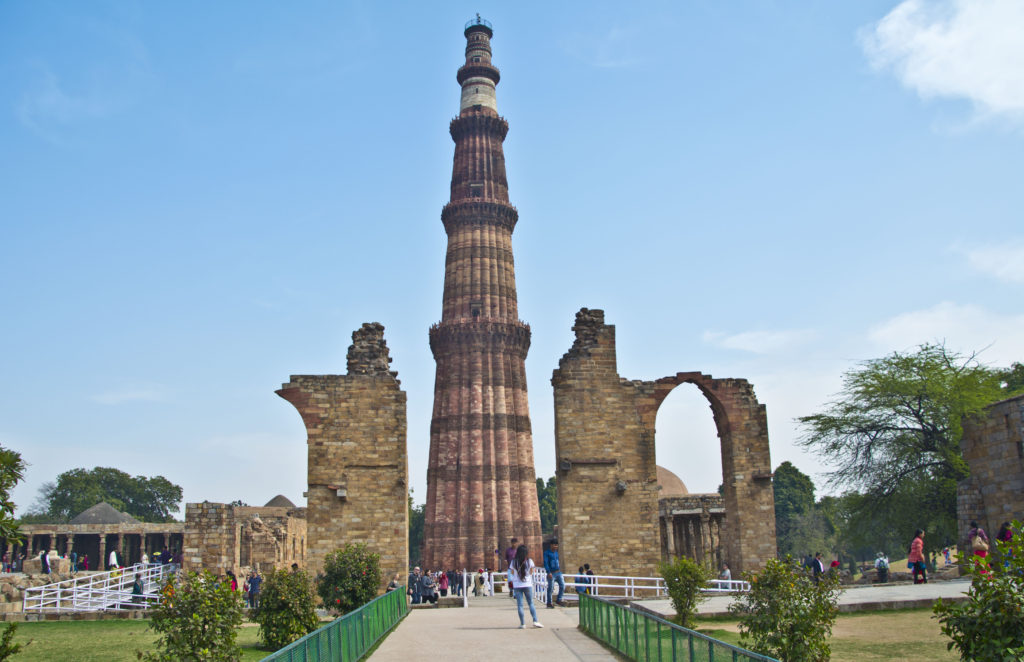 It is a 73-metre tall tapering five story tower built by 3 different rulers in 75 years from 1192 to 1369. It is also a UNESCO’s world heritage site. The Minar is surrounded by many monuments and the whole complex is known as Qutab complex. The lower 3 columns are made of pale red sandstone and separated by balconies, 4th column is made of marble and 5th is of marble & sandstone. The flanges are engraved with Quranic texts in calligraphic style and there are other decorative elements engraved on it. There is an iron pillar which is known as “Iron Pillar of Delhi”, it is made of the rust-resistant composition of the metals. This pillar is a testimony to the high level of skill achieved by the ancient Indian iron smiths in the processing of iron. There is a mosque, few gardens areas and ruins around the Qutab Minar. 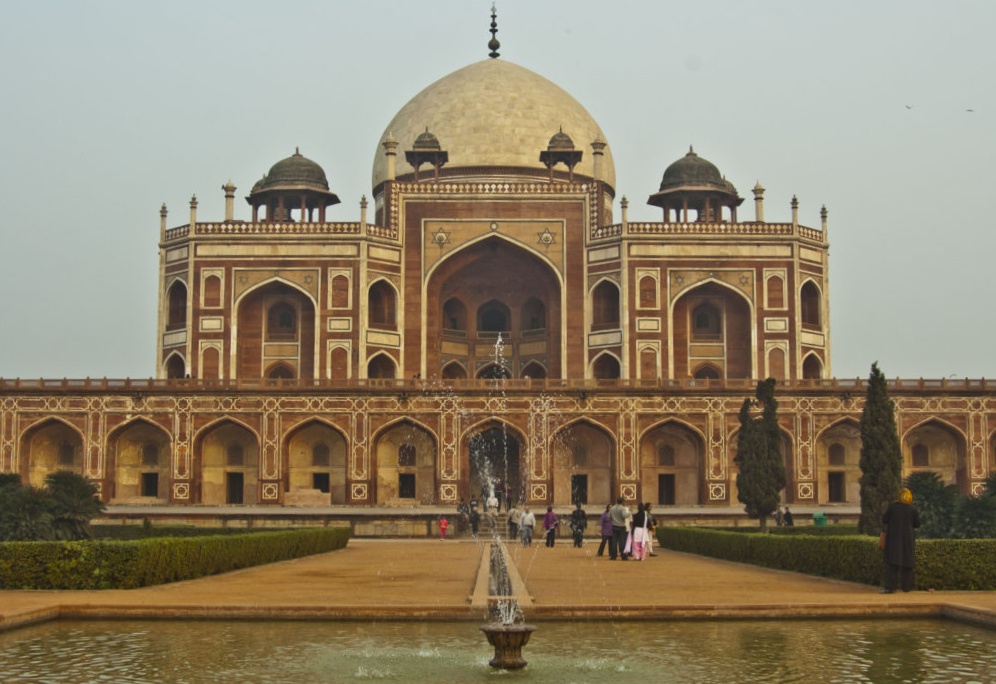 Humayun’s Tomb is a mausoleum built in memory of Humayun by his first wife Bega Begum. The main tomb of the Emperor Humayun also houses the graves of Bega Begum herself, Hamida Begum, Dara Shikoh as well as numerous other subsequent Mughals. It was the first structure to use red sandstone as main building material and have Charbagh gardens design based on the Persian concept of gardens. The mausoleum is a synthesis of Persian architecture and Indian traditions. The Humayun’s Tomb complex comprises of many other historical buildings and most notable buildings are Nila Guband and Isa Khan’s tomb. This tomb complex is also a UNESCO’s world heritage site. This complex is one of the most beautiful historic structures in Delhi. Humayun’s tombs design was the inspiration for the Taj Mehal’s designers. 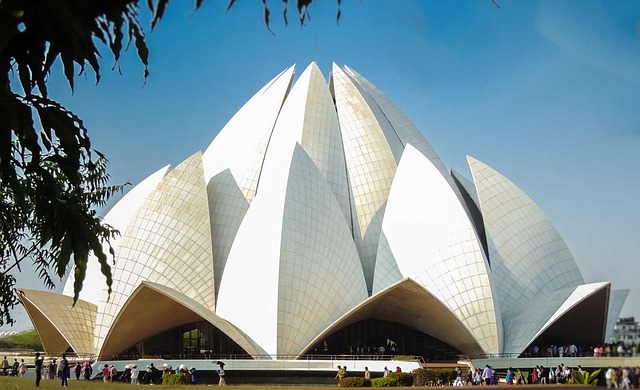 It is located in the south of Delhi near popular software market of Nehru place. Lotus temple was completed in 1986 and open for people of all religions though it is the place of worship for people from Bahai tradition.The name Lotus came from the shape of a temple, it is composed of 27 free standing petals made with white marble. There are 9 doors opening into the main hall, which is used as a place for worship & meditation. It has a capacity to seat 2,500 people in the main hall. It is one of the most visited places in Delhi. Over the years the design of Lotus temple won many several national and international awards for its design. 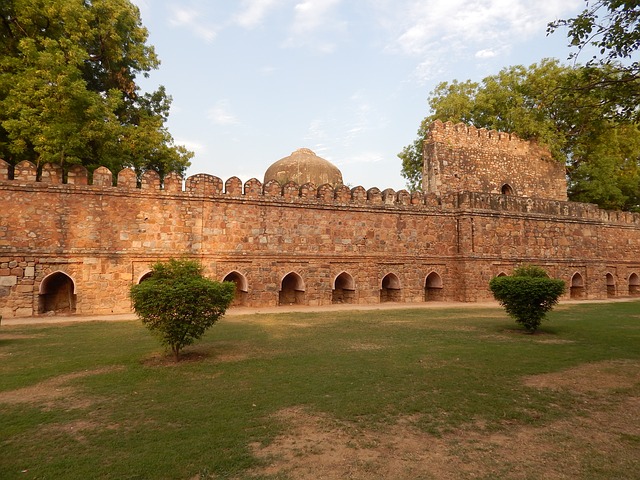 This garden complex is spread over 90 acres of area and was developed in 15th century by Lodhi dynasty rulers. In the middle of beautiful gardens are tombs of Mohammed Shah, Sikandar Lodi, Shisha Gumbad and Bara Gumbad. These tombs are a good example of a combination of the Hindu and Islamic styles of architecture. The Lodhi garden is a popular hotspot for morning walks of Delhi people. In spring season the rose garden becomes one of the main attraction due to the blooming of roses.

India Gate and President House
India gate is war memorial built in the memory of 82,000 soldiers died during first world war between 1914 to 1921. It is often compared with the Arc de Triomphe in Paris. It is located astride of Rajpath, which goes directly towards the president house. There is a small simple structure made of black marble plinth, with a reversed rifle, capped by a war helmet and bounded by four eternal flames beneath the Archway of India Gate. This structure is called Amar Jawan Jyoti and was built in memory of soldiers died in 1971 war.
Across the road on Raisina hills is a grand presidential palace. Entry is restricted to it but one can see the grand building from outside. During the Independence day (15th August) and Republic day (26th January), it is illuminated with millions of small bulbs and a sight not to miss.

Bangla Sahib
It is a place of worship for Sikh religion located in Connaught Palace but is open for everyone. The main sanctum is made of white marble and is surrounded by a small pond. The golden domes of gurudwara give it a unique identity. It’s a beautiful and peaceful place in the middle of the city.
The community kitchen of Bangla Sahib runs 24×7 and it feeds people from all religion without any discrimination. If one gets a chance then must visit the kitchen for the unique cultural experience.

Connaught Place and Janpath
It is New Delhi’s most sought after and largest commercial and business centers. There are shops and showrooms of all major national and international brands. This market is full of eating joints from street food to international fast food chains to fine dining restaurants and some of the best 5-star hotel in Delhi.
There is something for every budget traveler. The famous Janpath market is popular for fast fashion items but one should know how to get a good bargain price.
Central Park in the middle of Connaught Palace is another popular place for young people. 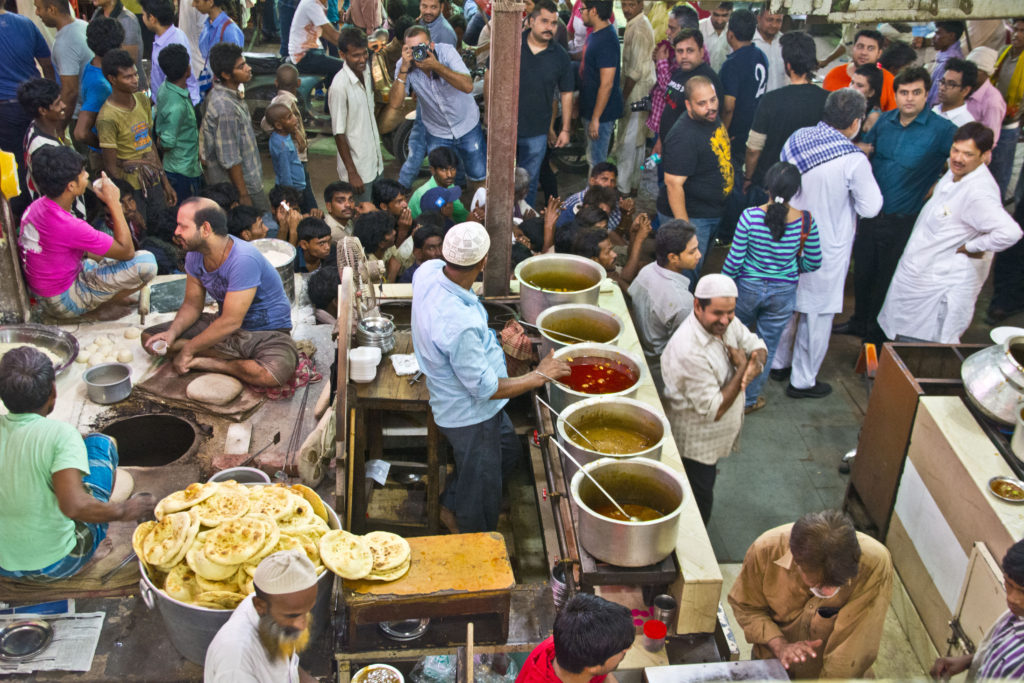 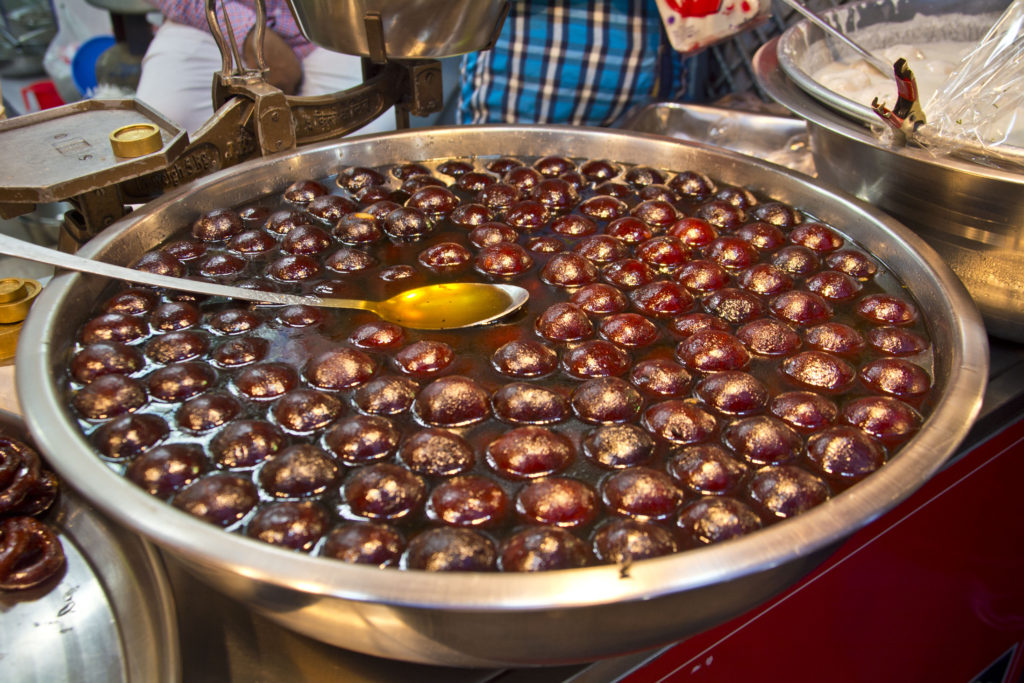 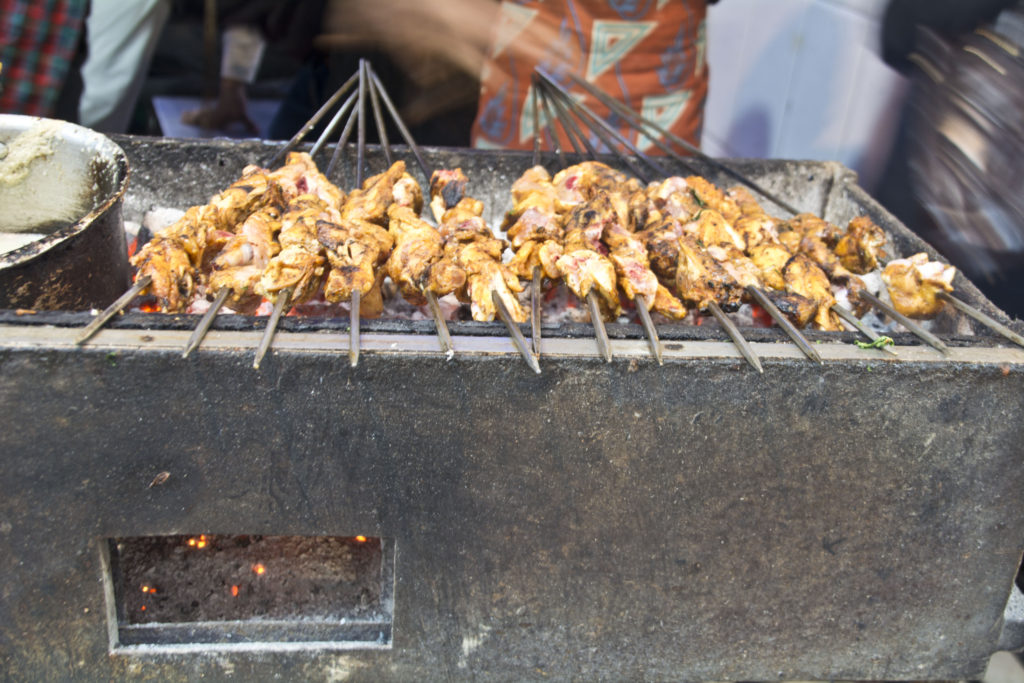 This is one of the oldest markets of Delhi. The lanes are narrow and there are many small or big shops in these lanes. This area was developed by Mughal emperor Shan Jahan along with Red Fort. This area was once filled with mansions (Haveli’s) of nobles and members of the royal court, there are some old mansions restored and now open for public.
The market in this area gives a unique experience. There is a separate lane for every product and in that lane, only that product is sold, for example, if it’s silver market then all shops will sell only silver items nothing else or if a lane is for clothes then all shops will sell clothes or lane for footwear etc etc
Old Delhi is popular for its Mughalai food and sweet shops. The area around Jama Masjid is very popular for nonvegetarian food and there are food walks organized in this area for a time to time for food lovers.

Hauz Khas Village Tour
It is complex in south Delhi, there is reservoir surrounded by beautiful buildings and a well-maintained park around. it looks beautiful during the sunset. But the main attraction of Hauz Khas is an electric nightlife with countless cafes, bars, and pubs. There is nothing like a village in this area except for its name. It is a very popular place for party and pubs, there are many upscale bars and restaurants. Apart from these, there are studios of many upscale and popular Indian designers. 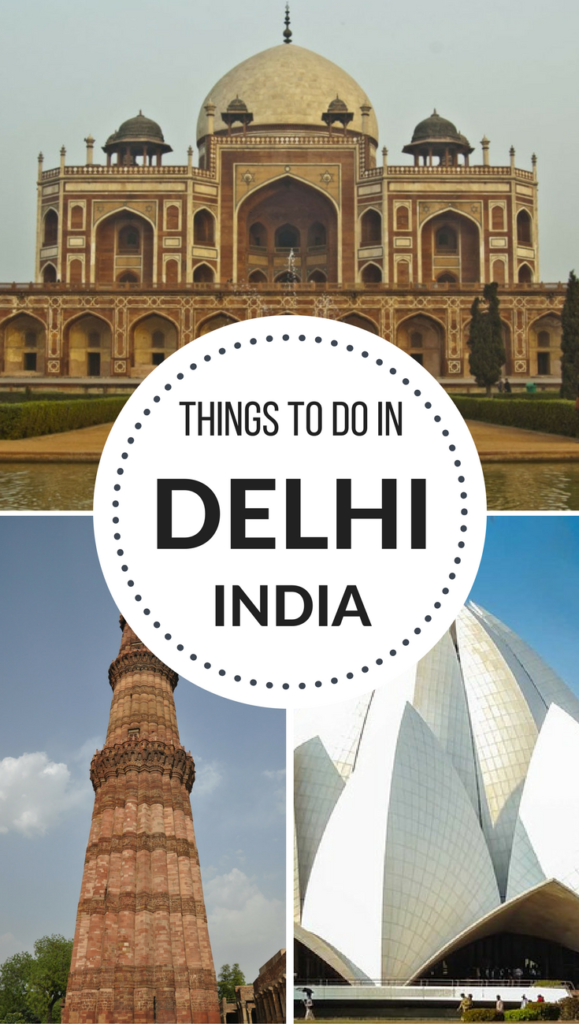