Planning a weekend trip to Berlin, Germany? Read on for a complete 2 days in Berlin itinerary including the best things to do and where to eat written by a local.

– Written by A History Geek in Town –

Start your itinerary with the majestic Berliner Dom (Berlin Cathedral) on Museumsinsel. Restrained green-and-blue outside, inside it’s rioting Baroque, all gleam and gold. Like most of Berlin, it rose from the ashes after the Second World War; but it was also much-better restored than most of Berlin, and thus very much worth the €7 entrance fee ( or €5, if you are a student, an unemployed, a senior or a child). If you don’t mind a bit of exercise, you can also go up 270 steps to walk around the dome itself. You’ll be able to survey both the city and the bees that live on the roof. 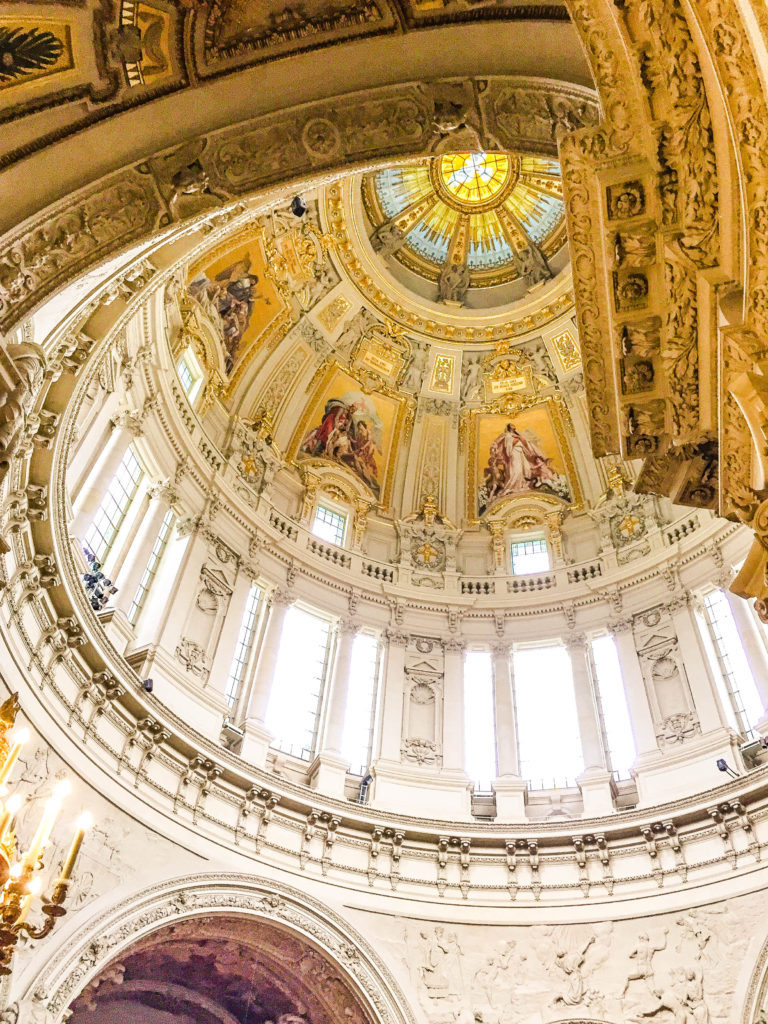 The inside of the Berliner Dom

After you emerge into the daylight again, have a walk along the classical facades of the museums of the Museumsinsel (which literally translates as Museum Island). If you are a history buff of any kind, you would be spoiled for choice – the Egyptian collection crowned with the famous bust of Nefertiti in the Neues Museum, the indigo-coloured gates of Babylon in the Pergamon, the statues and mosaics of the classical antiquity in the Altes Museum. 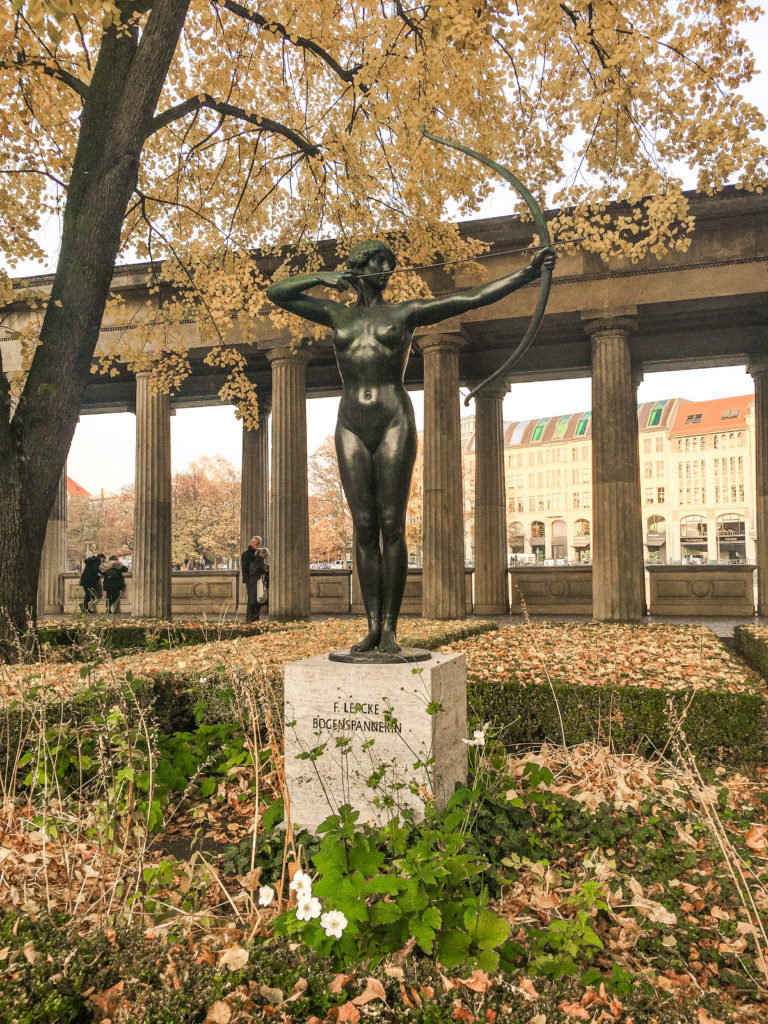 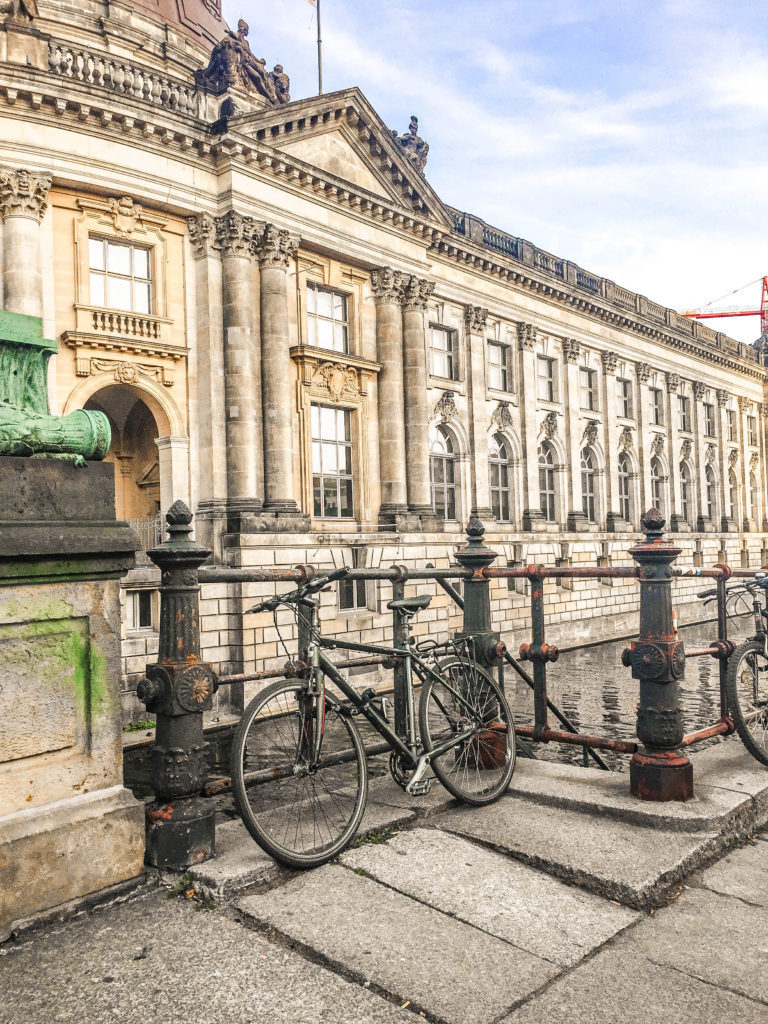 If you are lucky enough to be here on Saturday or Sunday, you can also visit the antiquarian book market by the Bode Museum, on from 11:00 to 17:00. There are some books in English, and most of them are just… well… pretty.

After the Bode Museum, enjoy a 15-minute walk along the Spree embankment (or persevere, depending on the weather) until you reach the Rococo jewel that is Ephraim-Palais (Poststraße 16). You can go inside for the exact same €7/€5 tariff and look at the magnificent winding staircase.

Just outside the palace you are going to see a sign pointing in the direction of Nikolaiviertel. It’s tiny cluster of medieval streets that was painstakingly reconstructed after the air raids of the Second World War (these words are going to become a painful refrain if you continue visiting historical spots in Berlin, so keep that in mind). The place is picture -pretty, though has a little bit of a Disneyland-ish air. You can have a lunch in one of the open-air cafes on the cobblestoned square in front of the Nikolaikirche. 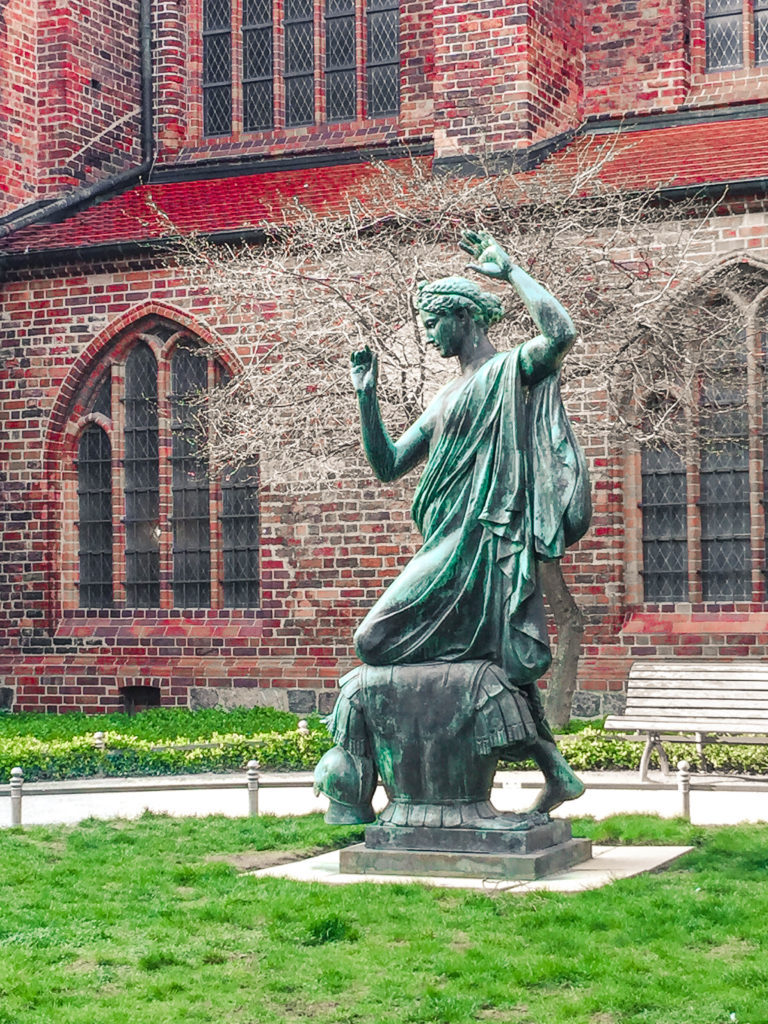 A statue in the Nikolaivierteil

After a 15-minute walk along Spandauer Strasse, you would reach the spacious, verdant, vaguely Art Nouveau-ish cluster of courtyards that is the Hackesche Höfe (Rosenthaler Str. 40-41). There are bars and restaurants inside, a cinema whose offerings are a mix of unusual and popular, and little shops selling pearls and chocolate.

On the Oranienburger Str. 28-30, you would be able to visit the Neue Synagogue with its magnificent gold-laced dome (this last one open to visitors from April to September). You would be able to walk around its museum for the standard 7,00€/ 4,50€ fee, and learn more about the history of the Synagogue itself, and that of the Jewish community in Berlin.

Nearby, on the Oranienburger Str. 32, there is the Heckmann Hofe – a charming, green courtyard with a theatre, a restaurant, several pop-up fashion stores, and one expensive coffee shop with great coffee and rough tables. It’s a pleasant and fresh retreat literally one step away from the bustling Oranienburgerstrasse. I personally loved the fresh black tea with berries in the Art City People cafe.

Today, we are going to the West Berlin – starting with the Kaiser-Wilhelm-Gedächtniskirche (Kaiser Wilhelm Memorial Church) on Breitscheidplatz. This church is one of the countless buildings damaged irreparably during the air raids of World War Two (…do you sense the theme yet?). 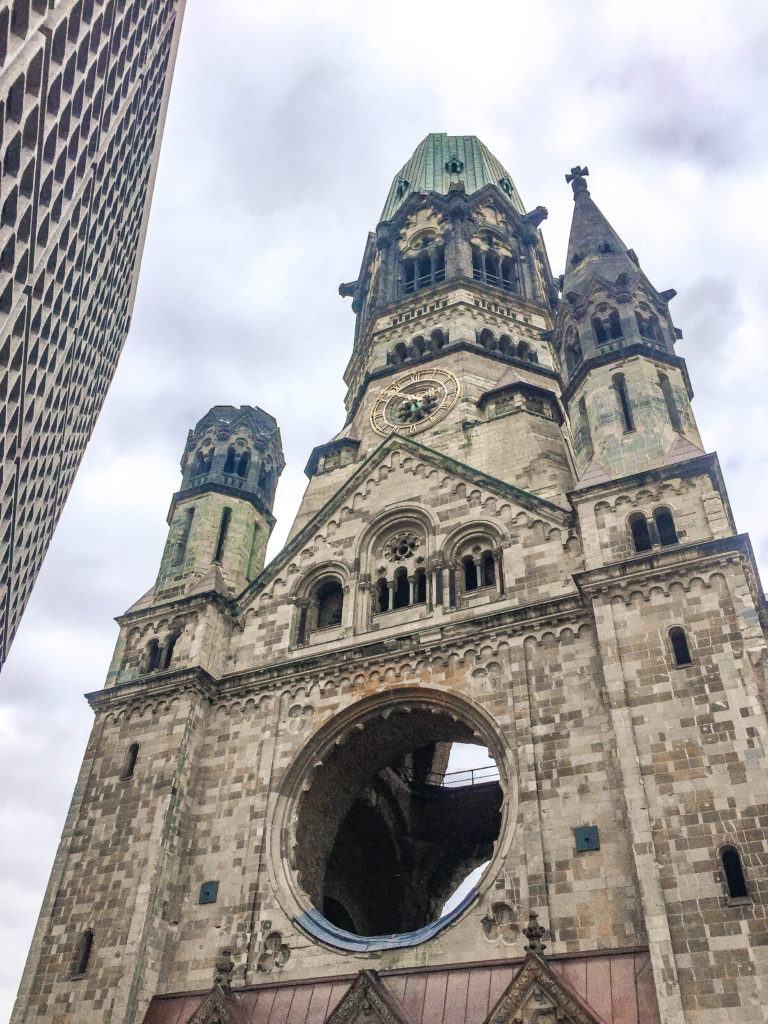 The Memorial Hall is entrance free. There, you’ll be able to enjoy the sight of a great mosaic covering walls and ceiling – it was splendidly restored. At the first glance, the mosaic looks very medieval – all indigo and gold, haloes and knights – but, actually, it had been commissioned in the nineteenth century by Kaiser Wilhelm the 1st to celebrate his own glorious life. 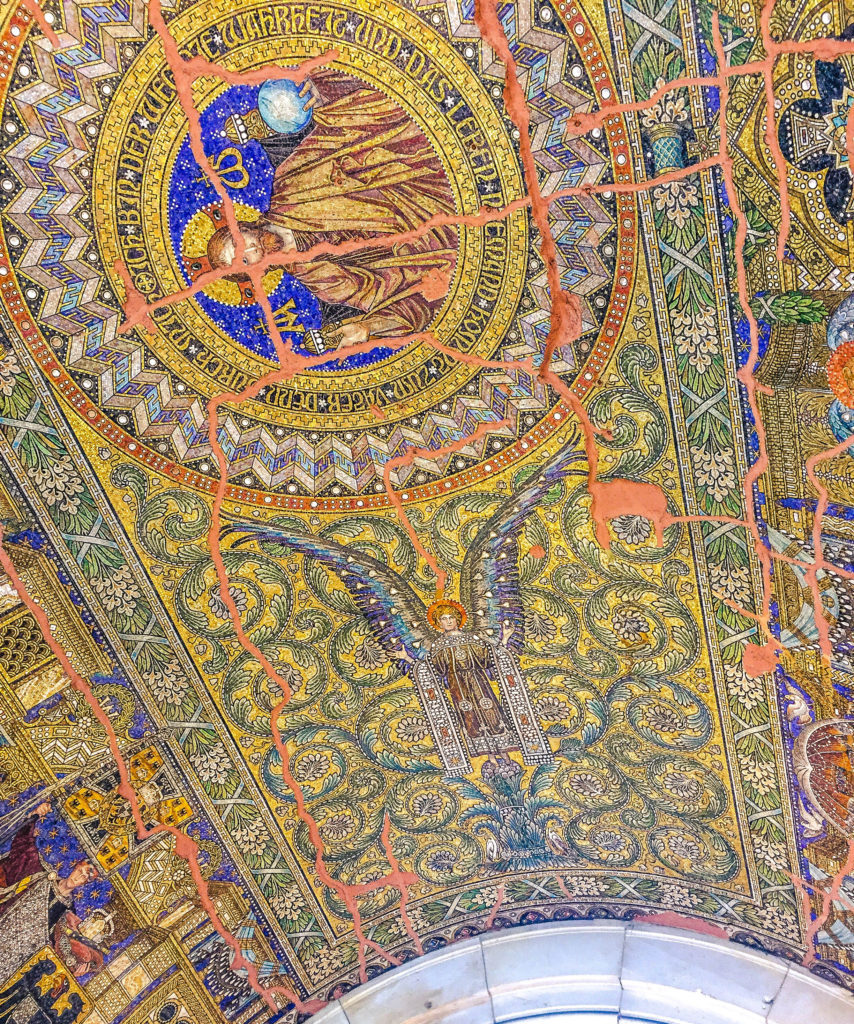 The mosaic in the Memorial Hall

Just outside the church, on Breitscheidplatz and Budapesterstrasse respectively, you’ll be able to visit two very different shopping centers. Europa-Center was opened in 1965 as a shining symbol of the regenerated West Berlin; the revolving Mercedes-Benz logo on the roof has long since become iconic, though the center’s main building now looks a little quaint. Just across the road, on Budapesterstrasse, there is the large and super-chic Bikini Berlin complex. Even if you are not into shopping, you can still go up to its 7.000 m²-large terrace and enjoy the sunny day.

Turn right onto Kurfurstendamm. This long and lush shopping street was – and is – often hailed as Berlin’s answer to Champs-Elysees. The responses to this comparison have always been divided, so I’ll leave you to construct your own opinion after you take this walk. 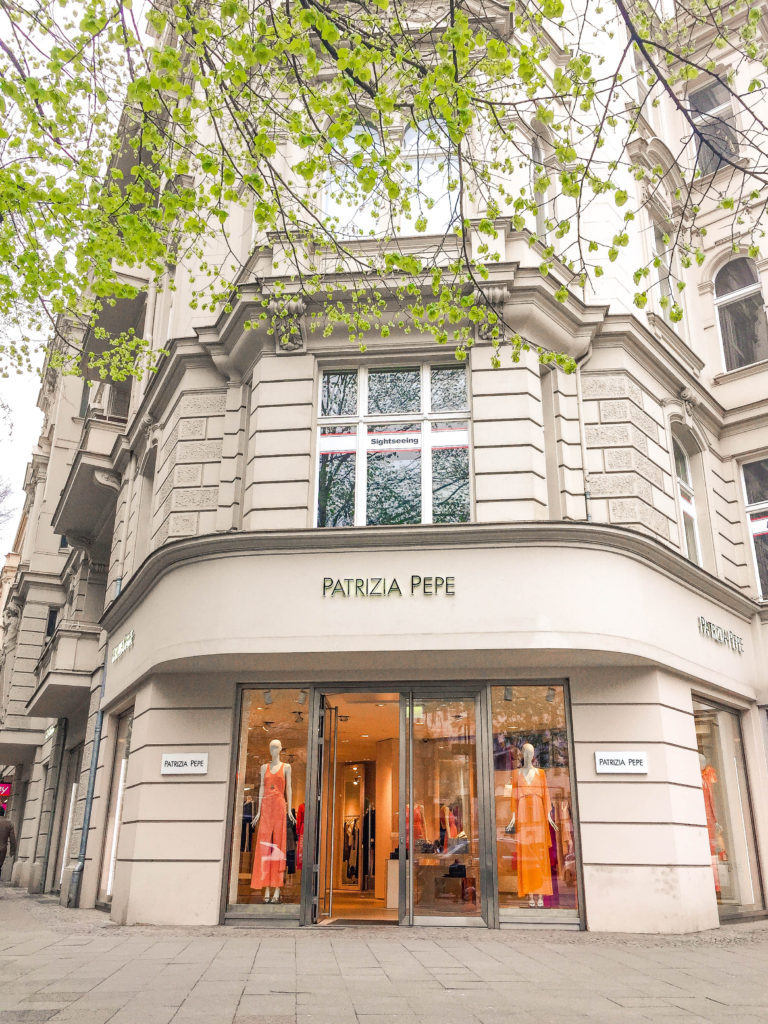 When I say ‘a walk’, I really mean ‘a hiking walk’, because the street’s total length reaches 3,5 km. In exchange for some exercise, though, you can enjoy the elegant facades of the countless shops – even if, like most of us, you would have to sell a kidney to buy anything within. Kurfurstendamm also boasts the only Apple Store in Berlin, so, if you would like to buy a new cover for comparatively reasonable (as far as Apple goes) prices…

When you can, turn left to Fasanenstrasse, and just a couple of minutes later you would reach the gorgeous Café im Literaturhaus – Wintergarten (Fasanenstraße 23). It’s located in a literary/cultural center set in a 19th century villa. There is a lovely terrace over the villa’s leafy garden, and very strong coffee and homemade pastries served inside. 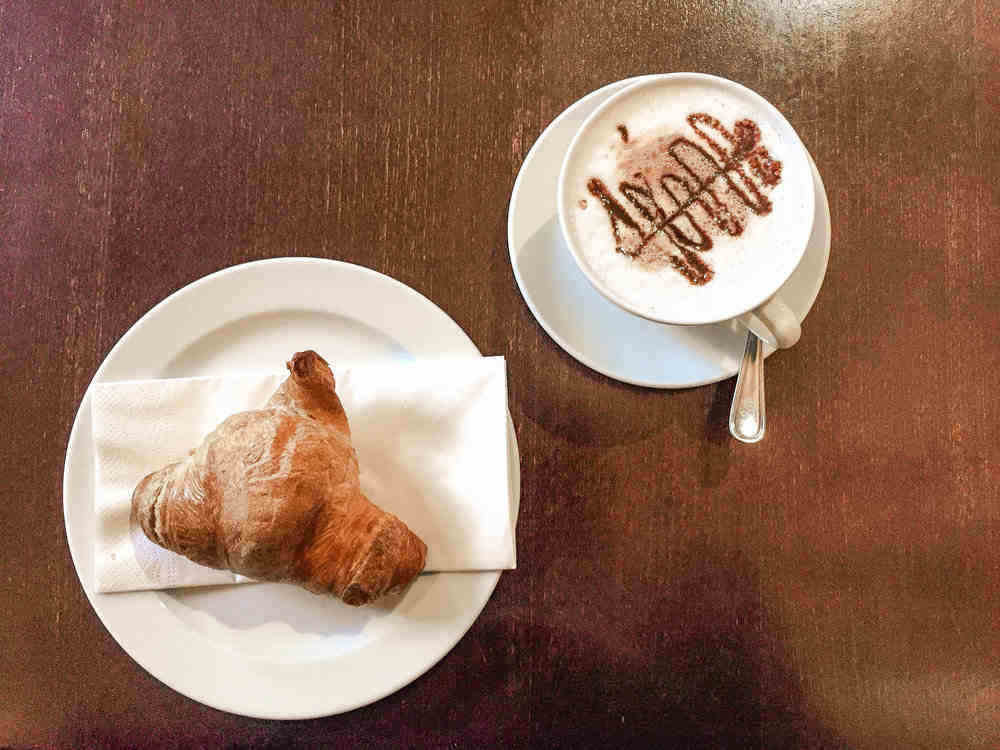 When you’ve had enough of Berlin’s resident shopping street, head back to Zoologischer Garten U-Bahn station and catch a train to Sophie-Charlotte Platz. From there, enjoy a 15-minute walk along Schloßstraße. It literally means Castle Street, which gives a none-too-subtle hint about your next destination – Schloss Charlottenburg (a.k.a. Charlottenburg Palace). 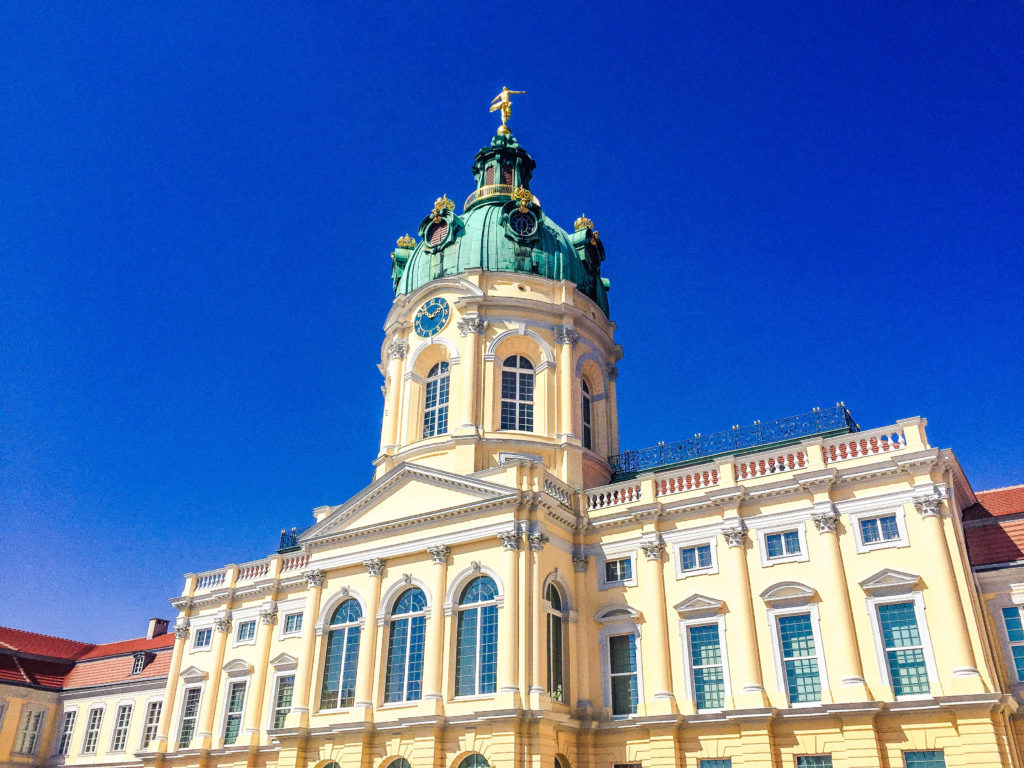 Incidentally, this is one of those cases when the road is as good as the destination. The street will greet on both sides with white and yellow classical facades, independent bakeries, and at least one perfectly preserved 19th century villa – namely, Villa Oppenheim, now a museum (Schloßstraße 55).

Schloss Charlottenburg awaiting you in the end of the road is like a perfectly proportioned cake of classical beauty (Spandauer Damm 20-24). It started out in the early 18th century as a modest summer retreat for Queen Sophie-Charlotte. And it really was initially modest (well, in queenly terms), but was expanded under later rulers into Versailles-like splendour in vein of the general effort of keeping up with the Bourbons. A new wing, called literally The New Wing (Neuer Flugel) was added by Friedrich the Great.

There are two buildings, in total – the Neuer Flugel itself, and the Alte Schloss, alias Old Palace. Also, in the garden, there is the Mausoleum with the gorgeous white marble Hohenzollern tombs and the Belvedere with its painting collection. Surveying all this goodness is probably going to take you hours and cost you a hefty €17, but, believe me, it’s worth it – if only for the porcelain collection in the Alte Schloss. An English-speaking audio tour is included in the cost of the ticket (yay!), and, after the hours of cultural nourishment, you could finally get some literal one in the cafe in Kleine Orangerie just the the left of the main entrance. You can have you cake and eat it, too, in its nice intimate courtyard.

Have more time and looking for more things to do in Berlin? Read More:  AUF ACHSE: STREET FOOD MARKET IN BERLIN and 5 BEST THINGS TO DO IN PRENZLAUER BERG, BERLIN.

Best time to visit Berlin: May to October, to enjoy the nicest weather. Although brief spells of cold a possible in May and June, so take care (and at least one warm coat)!

Getting around Berlin: There is a decent system of buses, but the best way of getting around Berlin is the U-Bahn (metro) and the S-Bahn (also metro, but overground). Berlin is divided into three zones – A, B, and C. It would be a safe guess that you would mostly be travelling around the A zone, with only occasional forays in B. A day pass for zones A and B costs the comparatively merciful 7 euro (or 4,70 with concessions). Just in case, would also recommend to download the free official app for overviewing the Berlin transport network and plotting your route accordingly: FahrInfo by BVG. 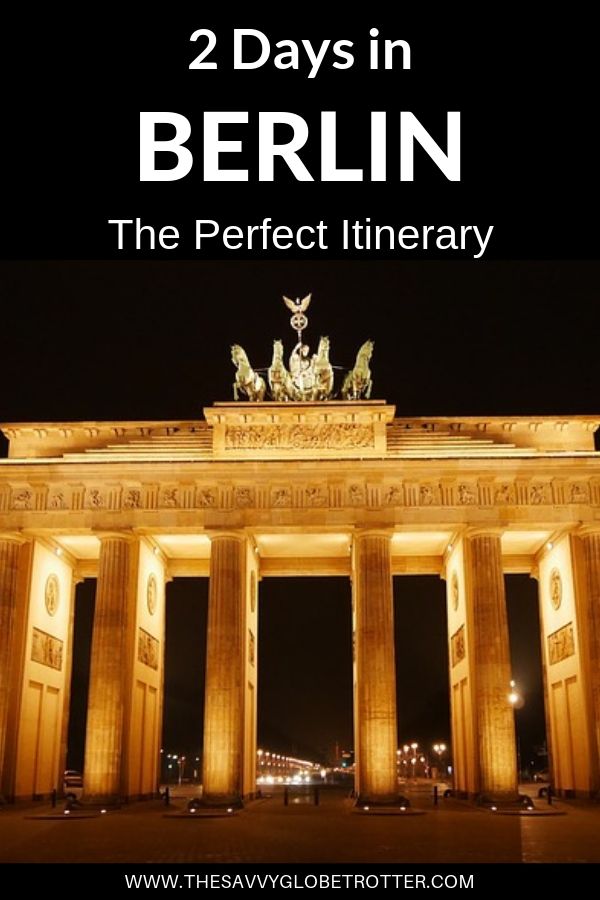