The Barkhor is such an area near the Jokhang temple, that it has got a narrow street and also a public square. This street is one of the most important tourist attraction spots when it comes to touring Tibet. Just like each and every place on this Earth has got its own history, culture and heritage, Barkhor Street has also got its own culture and heritage. The culture and the history behind Barkhor Street give Tibet a new image. This street is perhaps one of the most famous streets in the entire world and each and every tourist must go and see and walk through the Barkhor Street during Tibet travel. 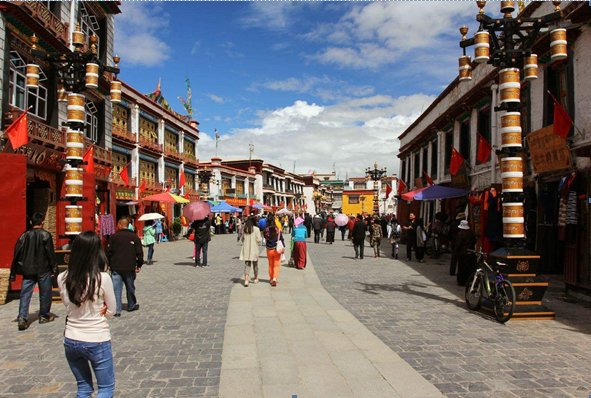 The exotic culture that the Barkhor Street of the Lhasa city boasts of is something quite unique. The encircling of the Jokhang temple through the Barkhor Street is quite a common ritual as the pilgrims believe that this helps in spiritual attainment. One of the most common sights which you are going to find each and every morning on the Barkhor street is that people walking on the Barkhor street to encircle the holy temple of Jokhang with prayer wheel and rosary on their heads. Some of the most devoted pilgrims and religious followers do the encircling by prostration because they believe that in this way they can more amount of spiritual attainment. During the time of the holy Tibetan month, Saka Dawa, lots and lots of people walk on the Barkhor Street especially on the 15th day of the holy month. Apart from the religious culture, one can also find a number of shops show casing the local handicrafts, which are in fact quite artistic. This the place where you can buy some mementos because here you can buy anything, from a small replica of the Jokhang temple to a Tibetan carpet in the least possible price that you can ever imagine.

You have already read about how the Barkhor Street is one of the most religiously, historically and culturally significant places in the entire country of Tibet. So, of course, there should not be any dearth of activities on this famous Street and there isn’t in fact any dearth of activities. However, here are three experiences which you absolutely must have if you are on the Barkhor Street:

There are a few number of tea houses on either side of the street. You should certainly go to at least one of them and a have a cup of their wonderful sweet tea with some light snacks. The moment you take your tea cup close to your mouth you will be getting the sweet yet an exotic aroma of the tea, which by the way tastes incredibly delicious. If you visit with your family, it is the perfect place to spend your evening time, relaxing and having nice conversation with them. But, then again if you have visited the Barkhor Street alone, then also you must visit the tea houses to spend a bit of alone time in a peaceful manner. If you are good with unknown people then you may even strike a conversation with some of the locals.

2) Walk the kora around the Jokhang temple 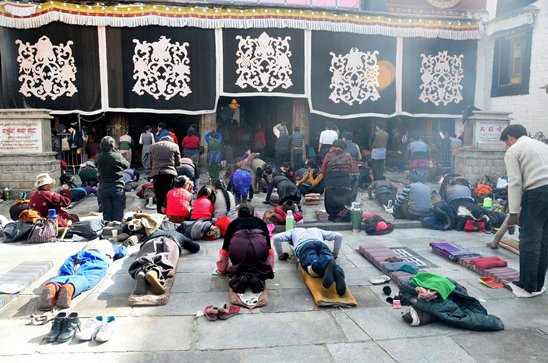 The religious walk around the Jokhang temple is something which you must do in the early morning with a wheel prayer and a rosary on your head. You must do it whether you are a believer in God or not because it is a kind of experience which you would definitely not want to miss. You may not have to follow all the rituals in details but, by just walking with the locals in the religious walk, you will feel a connection to the place. These kinds of small experiences make our life whole and complete. 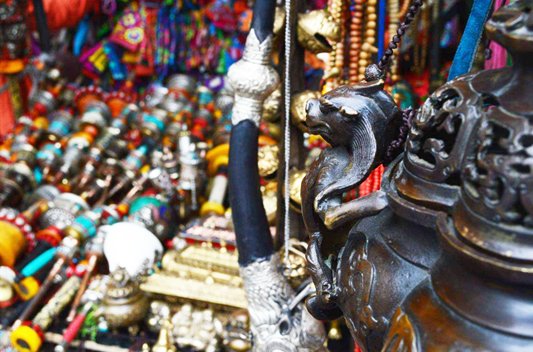 Barkhor street has got a number of handicraft shops along with different other kinds of shops in its famous Tromzikhang market. Here you can find souvenirs, Tibetan Thankga paintings, jewellery, Tibetan medicines, handicrafts, Tibetan snacks and a lot of other items. There are a lot of items to choose from and if have got a shopaholic with you then it is safe to say that you are stuck on the Barkhor street’s shops for a very long time.

Thus, you can clearly imagine why the famous Barkhor Street of the Lhasa city is considered to be one of the prime tourist attractions of the entire country of Tibet. It is a unique place which gives you a unique experience and that’s the reason why you should be visiting Barkhor Street for your Tibet tour.